To HEL and back – Finnair A350 Business Class, Hilton, Indigo

The Business Class mini-cabin on the Finnair A350

A mere four days since my arrival in London Heathrow Terminal 3, I was back and ready to embark on another adventure.

I printed my boarding passes at home and was travelling HBO. Fast track security is never particularly fast at T3, unless you have access to the private Virgin Atlantic lane, still I managed to make it to the lounge within twenty minutes or so of arriving kerbside.

Having visited all of the T3 lounges before, I was happy to make my way directly to the CX lounge (a lounge which has been closed for refurbishment for nearly 11 months now!)

The lounge dragon appeared to be undergoing training and was somewhat perplexed by the fact that I had both OneWorld Sapphire status and a business class ticket. He ended up directing me to the First Class section and got no pushback from me 😉

I didn’t have a huge amount of time to spare, given that I’d come straight from the office. Still I managed to grab some char siu pork and a G&T before the flight was called (sadly the Laurent Perrier Rosé had been replaced by Veuve Clicquot on this occasion).

Jet lag not enormously evident at this stage. That would change.

It had been a long time since I’d flown a new wide body aircraft type; I had hoped that the Bali trip would provide me with my first experience of the Dreamliner but that was vanquished at the last minute by the airline scheduling Gods.

My ‘last first’ had been my first ever A380, in First Class with Thai Airways, it was an absolutely amazing flight but a flight which was only really exciting for me. By the time I first set foot on an A380, the gargantuan whale jet was already old news. Singapore Airlines took delivery of their first in 2007. The crew and other passengers were not in on the excitement.

The A350 was quite a different proposition. Finnair was only the third operator of this aircraft in the world and is still the only European airline to fly it. Every member of both airplane and ground staff seemed to be genuinely excited for this.

As I made my way down the jet bridge I had tried to get a decent shot of our vessel but was foiled by the design of the terminal. Before I knew it I was faced with a pair of very friendly FAs at the cavernous entrance.

All passengers boarded through the same door, meaning that there was a fair bit of foot traffic through the business cabin after I took my seat. I opted for the mini-cabin, as I do on every plane that has one, as they tend to provide a cosier and more exclusive feel than the more expansive main business cabin. My immediate observation is that the A350 feels so much more expansive than even a 777 F class cabin with its overhead lockers removed. The ceilings are super high, it feels like you’re just standing in a regular room as opposed to being on a metal tube which hurtles through the lower stratosphere.

It is safe to say from the open jawed reactions and frenzied outbursts of smartphone photography, that most people were unaware that we were scheduled to fly on such an awesome beast. It also got me thinking that with some legacy carriers losing ground in Sisyphean battles against low cost carriers, the utilisation of wide-body jets on short routes could be a fantastic way to surprise and delight their customers. Perhaps the logistics are just too complex but it would certainly make a seat on BA seem a little more appealing, if it came with the potential to be suddenly upgraded to a flight with IFE in Economy and flat beds in Business.

Happy place, happy face. On this flight nobody else was sat in the mini-cabin! A couple of FAs used spare window seats as jumpseats for take-off and landing but otherwise the entire space was mine 🙂

You really get a feel for the monstrous height of the A350’s ceilings in this picture. If you’re into middle pairs, the pair at the front of the mini-cabin are very private with no other passengers visible from these seats. If you have lots of stuff or you think you’ll need access to your carry on, any of the seats in the front row of the mini-cabin are good, as they all have large countertops for placing bags on.

Very clean and minimal design, usually you’d get proper headphones to hang on the hook. However on this short flight we were given disposable earbuds.

Whilst the cabin as a whole felt very spacious and looked very new (as it should), I couldn’t help feeling that the quality of the finishes was a significant notch below the Cathay Pacific equivalent which I had very recently flown on the A330. The seat is also noticeable narrower and has less legroom than the reverse herringbone seats on other airlines. The armrest is bigger though, so that’s something I guess!

Quite a narrow seat and no privacy shield at eye level, unlike Cathay and AA

Extra large windows like the Dreamliner, however these ones have solid blinds which pax can control for themselves

It was interesting to see a plane which had finally done away with RCA and S-Video ports, although I struggle to see why they didn’t add an HDMI port. The IFE control looked sleek and modern although the lack of a screen was very noticeable. I’m used to being able to look at a moving map, or flight time remaining, without interrupting my movie.

Still, my major problem with the old Cathay reverse herringbone seats was not an issue here: 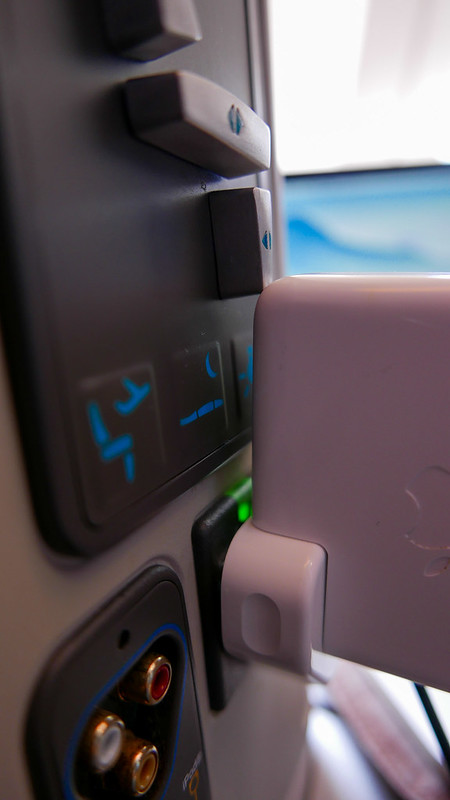 The major problem with Cathay’s seat: you can’t use a UK Mac charger

Other airlines have a full size storage pocket here, whereas Finnair only leaves enough room for a water bottle and the in-flight magazines

hook for hanging your headphones

Finally, the overhead warning signs have entered the modern era in glorious HD 😉

One downside to row 10 in the mini-cabin is that there is some kind of obstruction under the footrest, so there is no space for a carryon

Here’s a clear view of the footwell obstruction, as shown on 10K, during my exploration of the cabin

Since this is a short-haul intra-European route, I wasn’t offered a PDB so I took the chance to play with the IFE, the tailcam is absolutely my favourite feature. Although I have to say that the IFE system was incredibly slick and fast moving, with highly responsive controls. There was also a huge selection of entertainment with more of a classic back catalog feel to it, than the modern blockbusters that other airlines go for. Whilst this might be cheaper, it’s not necessarily a bad thing, there were plenty of great choices. There have been times on other airlines when I’ve been on a 12 hour flight wishing that we had a few less modern films and more choice selections from the past.

On this flight the IFE did cut out and reset four times, whilst on a separate occasion mid-flight the TVs all started playing the safety video. However I think this is more down to the crew still being unfamiliar with the controls than anything else. Thankfully the pilots appeared to have received some rather more robust training with their controls.

Turning onto the runway: as seen from the tailcam

Turning onto the runway: as seen from the window

It was nice to get a menu on a short flight, even though the menu wasn’t actually representative of the main course choices. Instead the FA told me that there was pasta, or a ‘chicken thing’.

I asked for a Campari and soda as my pre-dinner drink. I was brought a very generous pour, which was accompanied by a bag of pretzel and biscuit mix

I love the dripping icicle effect of the Finnair glassware: The Ultima Thule by Iittala

The meal was brought to me by hand, although being the only passenger in the cabin I’m not sure if this was the norm or whether this was just easier given the circumstances. Nicolas Feuillate is a pretty decent pour for a short-haul champagne and I love the style of the Marimekko cups and cutlery too.

The ‘chicken thing’ was pretty chewy and unappealing, the broccoli well over cooked

The FAs came over and spent a lot of time chatting with me on this flight, one of them said that I absolutely had to try the dessert and that it was pretty much the best thing ever. I’m glad he convinced me.

All too soon I watched the plane touch down via the wheel cam, which if anything is even cooler than the tail cam

Luckily HEL makes it much easier to take pics of the planes than LHR T3. The A350 looks as cool as hell with its shades on (or should that be as cool as HEL?)

This was a hugely enjoyable flight, being able to enjoy a flight whilst there’s still a new plane smell is an amazing experience. Having no other pax meant that I was able to really explore and take all the pics I wanted, whilst the FAs were also free to sit and chat with me about planes and travel.

The reverse herringbone seat is definitely the benchmark for a decent business class nowadays and I’m glad to see Finnair embracing it. I did find the finishes quite plasticky, the seat padding thin and the legroom confined when compared to AY’s competitors though. Still, the seat is one of the better offerings from a European airline and the feeling of space within the A350 cabin would definitely be very welcome on longer routes.

I was also impressed with the more ‘standard’ aspects of Finnair’s short-haul business class service, the tableware has a very cool design aesthetic, I like that there’s a printed menu and the drinks selection is a notch above what I’m used to from BA.

To HEL and Back