Almost all VS A340 flights are operated by 346s but there are still a few 343s knocking around, they have a different seat plan and a reel system rather than AVOD. Our gate didn't have a view of the plane, so we had to hold our breath before stepping aboard and... success! A 346, not too many of these are in use by major airlines these days, almost all of my long haul flights tend to be on the 77W, 388 or 744 lately. Although I go out of my way to fly the old jumbos so my experience is probably less than representative. My understanding is that 77Ws dominate now.

The cabin on the 346 features 3 across, with the centre row switching direction half way up the cabin. K and I were seated facing the "wall" rather than facing other pax. This makes quite a difference and really gives each individual seat a private feel. 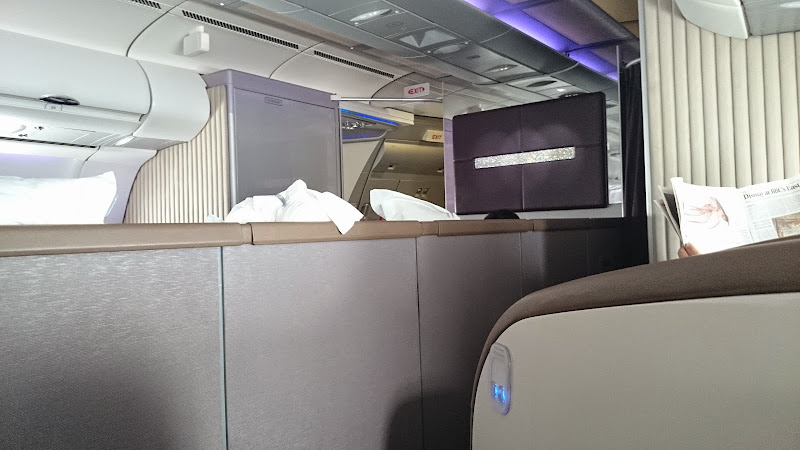 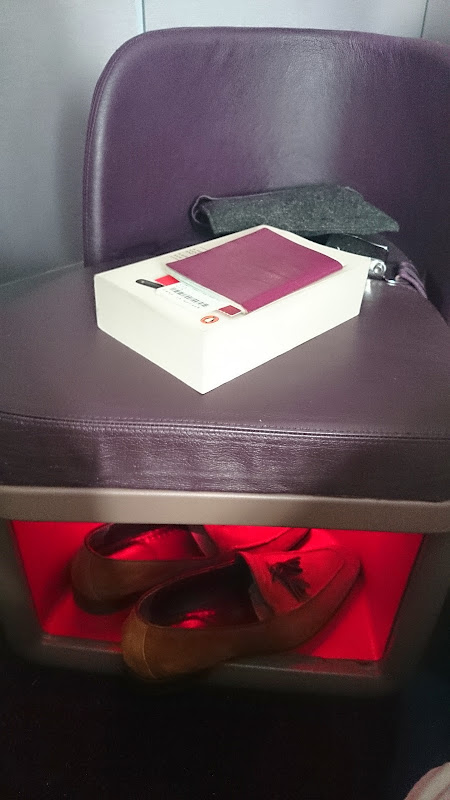 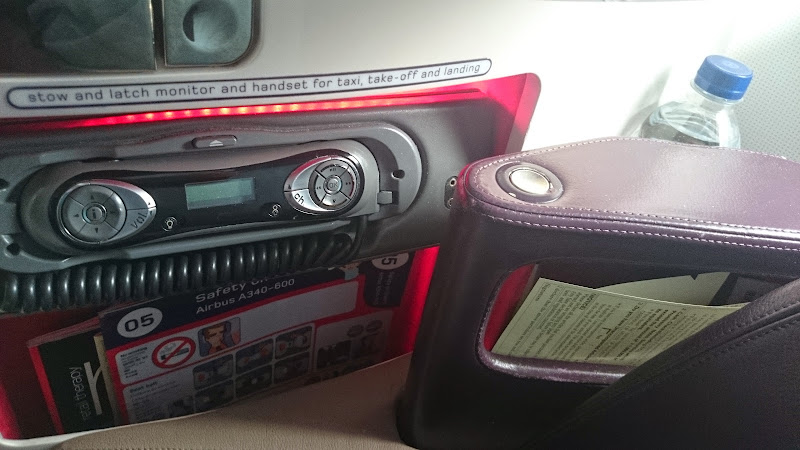 The crew on this flight were great. The CSM went around to each passenger greeted them by name, offered to explain seat functions and handed out menus, as well as relaying PDB orders to the rest of the crew. 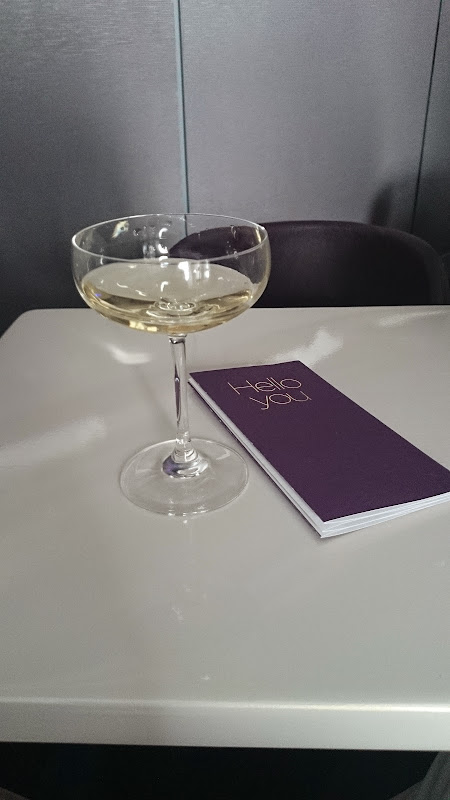 K and I went with champagne, in VS's signature coupe. Although I understand why they want to stand out by using a different glass, the problem is that given the slightest bit of turbulence the contents go flying. The lamp on the drinks table also encroaches right into the space occupied by the coupe so you have to place it right on the edge of the table too. The potential for slapstick, beverage based mishaps is pretty high. 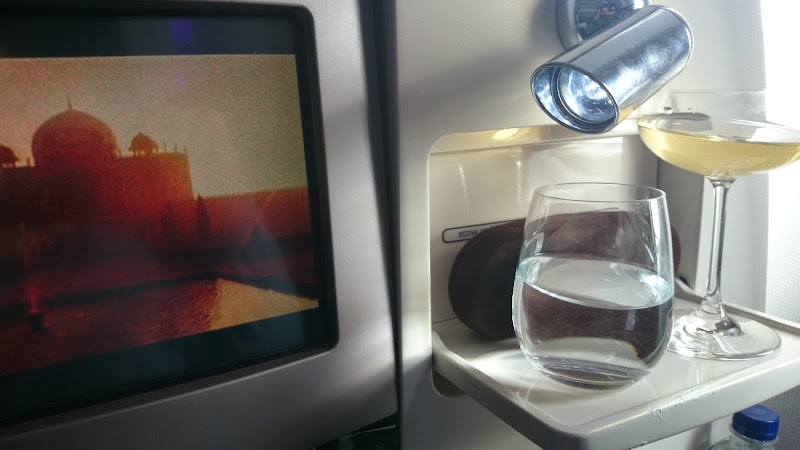 Needless to say, I sure as hell am not going to give up drinking champagne because VS chose this glass, so I did what any self-respecting FTer would do, I changed into my signature black VS PJs asap so that any spillages could be easily disguised.

Classy as my move was, it was nothing compared to the announcement made over the PA stating that intoxicated passengers would not be served alcohol. This was followed by an announcement saying that customer surveys were being placed on random seats and that customers "lucky enough" to receive one should let the cabin crew know and ask them for a pen. Not exactly the kind of announcements you expect on a full service airline. Although more of this stuff would come later in the trip with QF.

The meal service began moments after we finished our ascent.
One really great new feature aboard VS is that the IFE system has a guide to the wines offered in Upper Class. VS works with Berry Bros (one of my favourite purveyors of fermented, macerated and distilled beverages, located rather conveniently near to my office) who supply VS with wines which are particularly suitable for palates modified by dry, pressurised air. The IFE offers one program explaining the white wines and another the reds. After watching both programs I was ready to make my choice for the meal: I was offered a small taste first, shown the label and then poured a full glass. Great service. 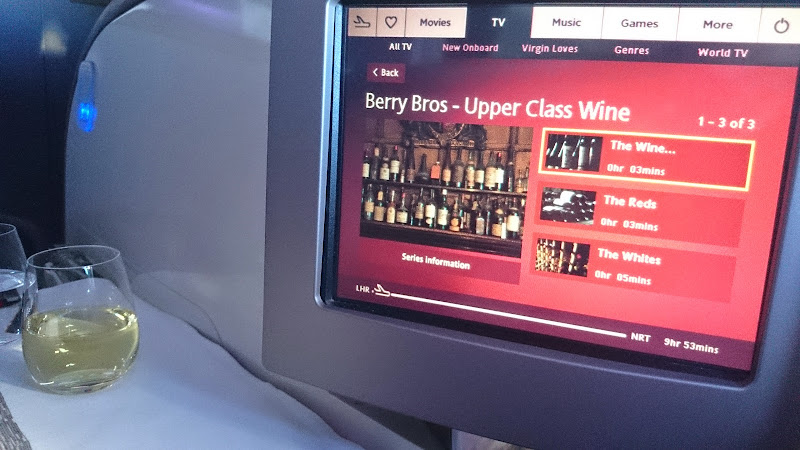 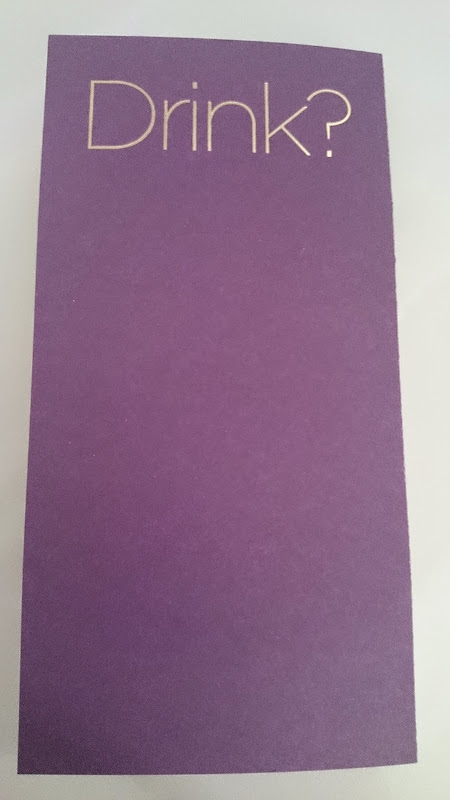 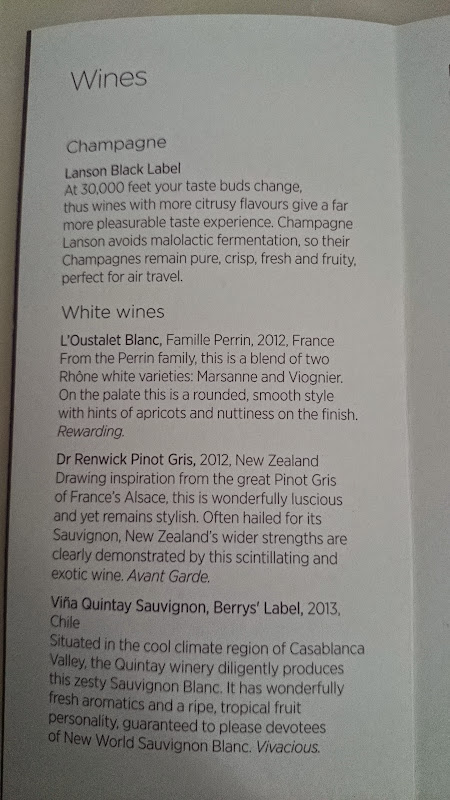 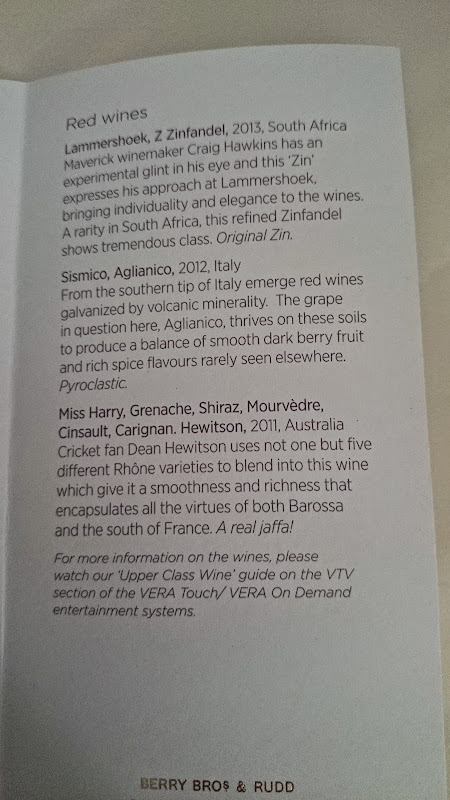 For the starter I went with the crab stuffed cucumber. It was not bad. The presentation was better than the taste though. I am a fan of the small wooden bread dish, the salt and pepper shakers shaped like planes and was delighted with the (British) FA who placed the chopsticks at the bottom of the place setting saying, "apparently this is the correct way to place chopsticks, not above or to the side, the Japanese are very particular about that"! That is some highly laudable attention to detail. 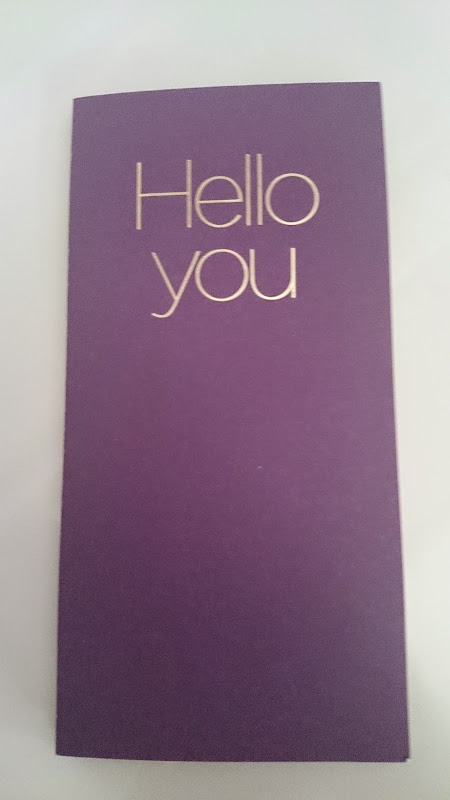 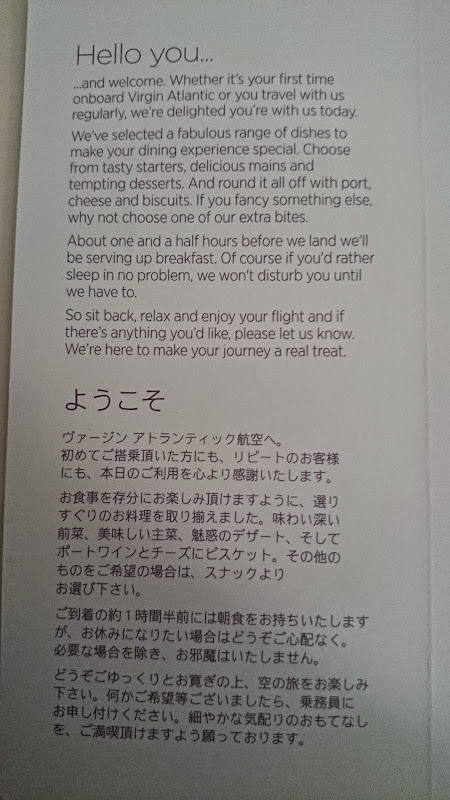 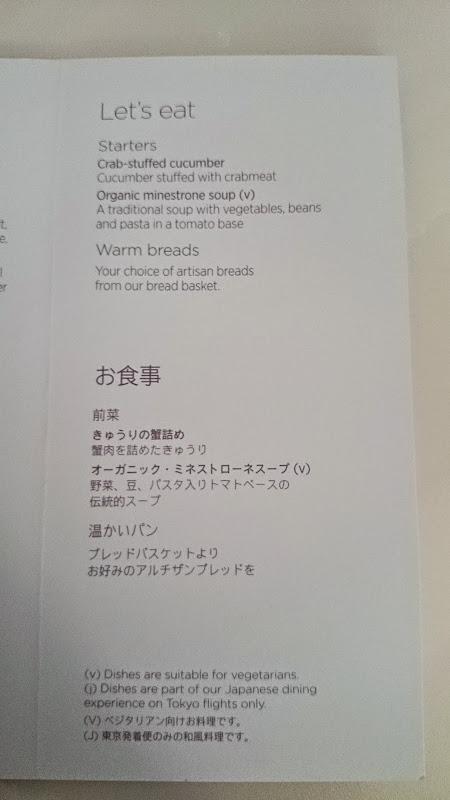 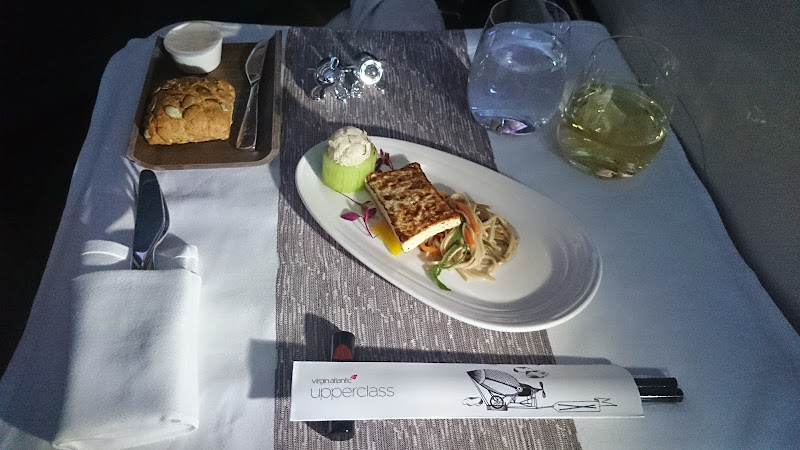 For the main course I went with the chicken yakitori. This was chicken in a yakitori sauce, rather than actual yakitori skewers. The chicken was a little on the tough side but the sauce was great and the rice was really well prepared. 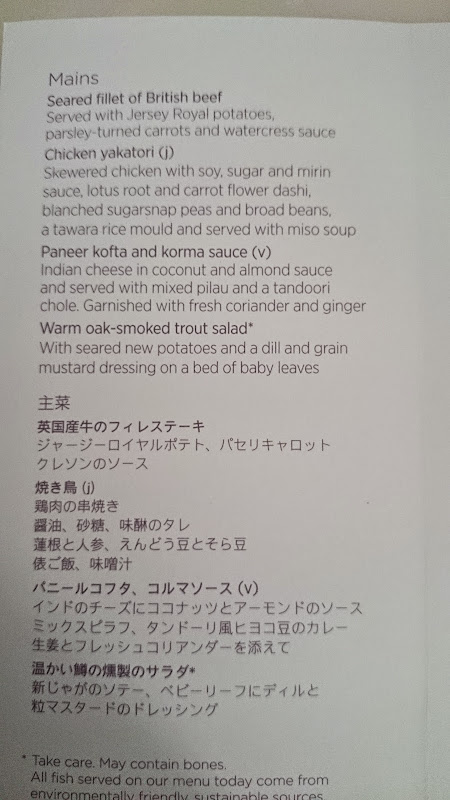 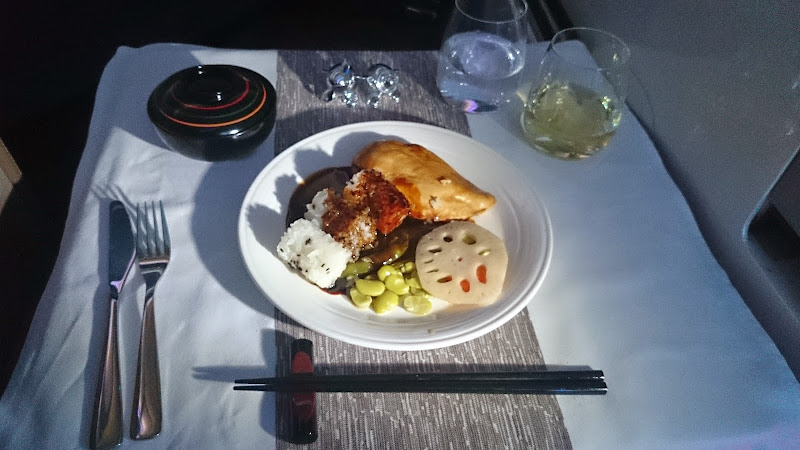 Unfortunately I was hit with some devastating news after my dishes were cleared. Our original aircraft had gone tech and in the hurry to get us onto this plane, the cheese hadn't been loaded! So, I skipped dessert spent a bit of time watching the scenery pass by and decided to get some shut eye. 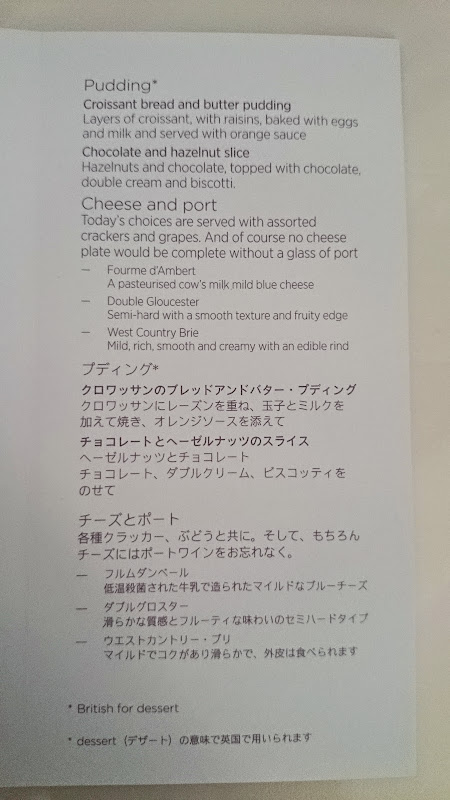 VS beds need to be flipped so the FAs come over and perform a turndown service. This is a double edged sword, you get a more comfortable sleeping surface but you are also forced to decide between sleeping or reclining, you can't do both. Total first world problem also shared by those fortunate enough to fly in SQ suites. 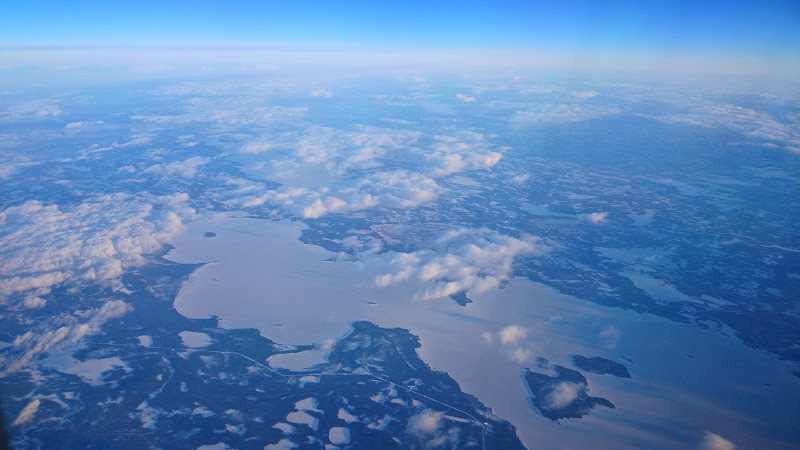 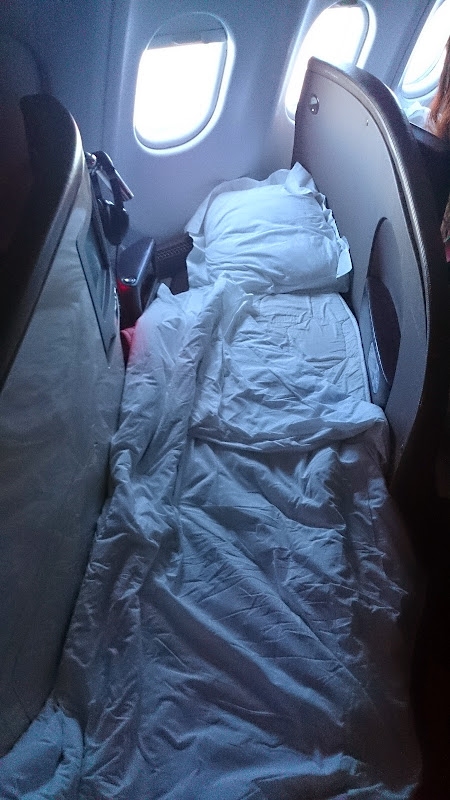 After a brief nap I asked K if she wanted to head over to the bar. Previously I've not really bothered with it but when you're flying with other people, it is pretty hard to communicate in herringbone seats, part of the trade off for increased privacy.

The bar was fairly busy but everybody made an effort not to be too loud, knowing that others were trying to sleep. The bar had a really good atmosphere on this flight with all the passengers engaged in conversation with the FAs and each other. K and I ordered sake and quickly smashed down a bag of wasabi peanuts. Seeing the speed with which we had dispatched with the peanuts, the CSM offered to bring us a dish from the snack menu. We asked for a portion of ribs to share, she suggested we should go for two because they take a while to prepare and she didn't want us going hungry after finishing the first plate. She was right, the portions were small but the ribs were delicious. 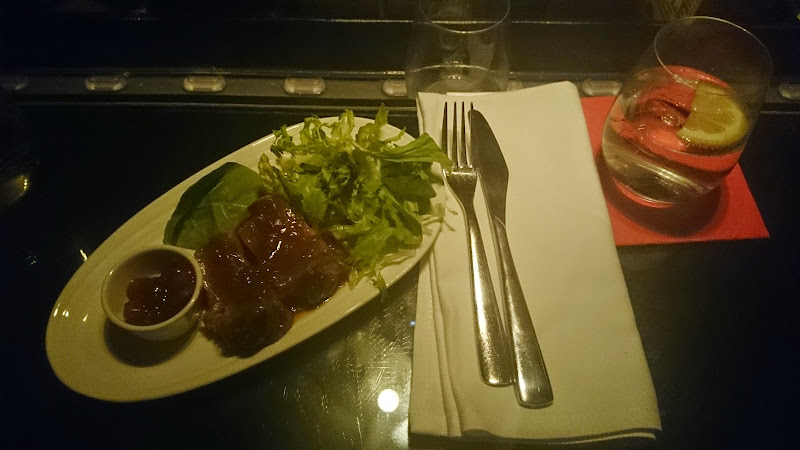 After another nightcap we headed back to our seats for some sleep. We were awoken 90 minutes or so before our arrival time. 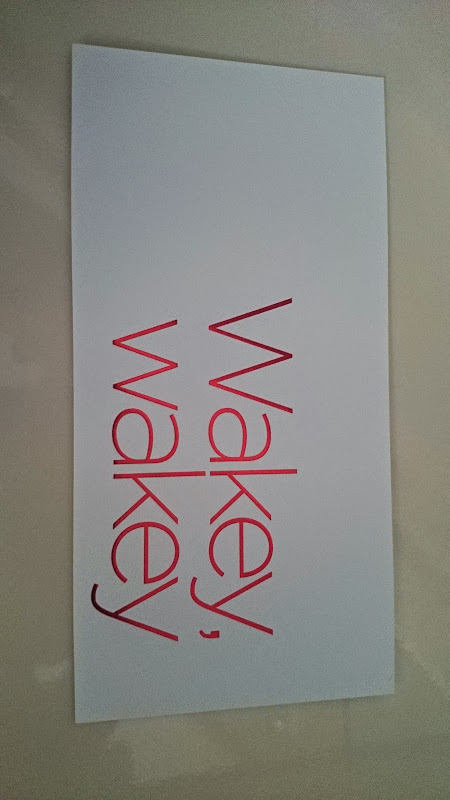 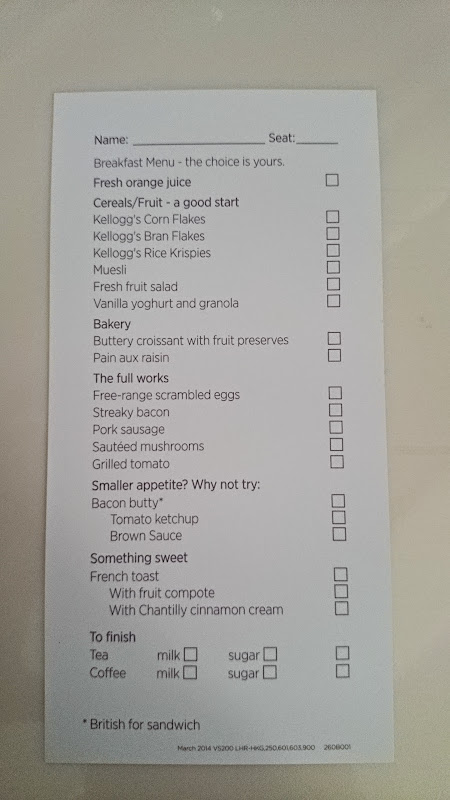 I ordered the full English breakfast and have to say that it was excellent. The mushrooms and tomato weren't soggy or greasy, the sausage tasted meaty and didn't have that filler consistency that airplane sausages sometimes have, the bacon was thick cut (sorry Americans!) and the scrambled eggs tasted really fresh and had a creamy, custardy consistency. I would bet that these were done sous vide, otherwise I struggle to see how eggs of this calibre could be cranked out at 35,000ft for a full J cabin. 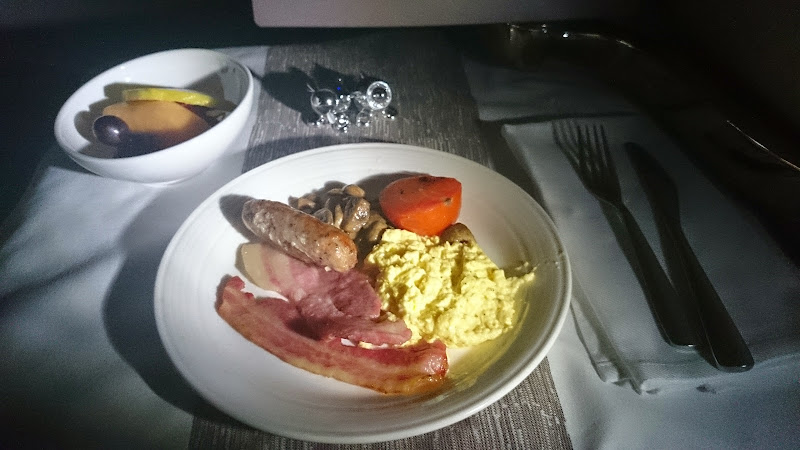 All in all this was a great flight, VS has a great ground experience although the addition of Delta elites seems to have had a negative impact during the first week of crossover benefits, the time in which we were travelling, I'm sure this will be ironed out over time.

On board, the crew were engaging, proactive and chatty. The beds are fully flat and private plus there is a decent snack menu and a bar. Also, PJs in J!