After months of waiting, the day of my first ever flight in Virgin Upper Class had arrived!

Wanting to maximise my time in the clubhouse I booked a taxi for 8am. Despite some pretty bad traffic, we pulled up to the gate of the UC wing at around 9:45, plenty of time to enjoy the facilities before the 1:45pm flight... only to be told that there was a technical issue with the barrier.

As this was the first sunny day that Britain had seen, for nearly a year, there were plenty of staff enjoying the sun outside. One of them quickly ran over and manually opened the barrier for us.

The UC wing experience is great, the greeting by name and quick check in really makes you feel like a VIP. The taxi driver mustered an emphatic “wow” as we pulled up to the giant, orb-like, sculpture marking the entrance to the check-in hall. I think that pretty much sums it up.

After a very quick security check, I made a beeline straight for the club house. I dropped my shoes off to be polished and changed into some slippers. Having heard that appointments are taken quickly, I headed to the hairdresser to book a haircut. Result! I only had to wait 15 minutes, just enough time to grab a yoghurt a smoothie and a macchiato.

Having your hair cut with a view of planes taking off and landing in front of you is an amazing experience. I got chatting to my hairdresser and found out that she can fly PE on waitlist whenever she wants and even gets a certain number of UC vouchers that she and her family can use every year, Perhaps a change of career is in order for me!

Post haircut, I decided to eat something a little more substantial. I was told that food couldn’t be brought up to me on the rooftop, so decided to settle down at a window sofa to some eggs royale, champagne and another macchiato. 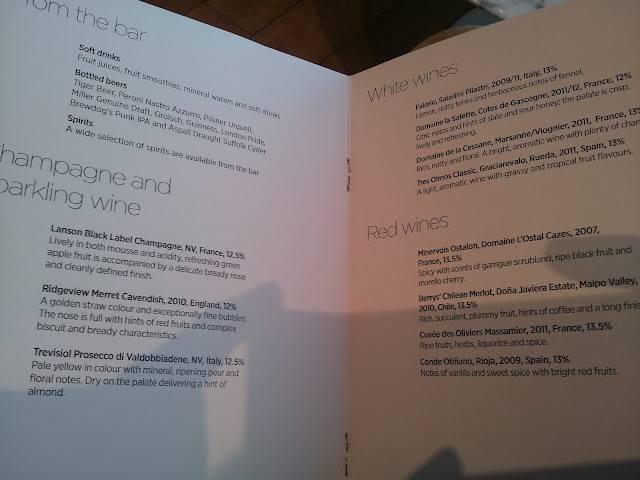 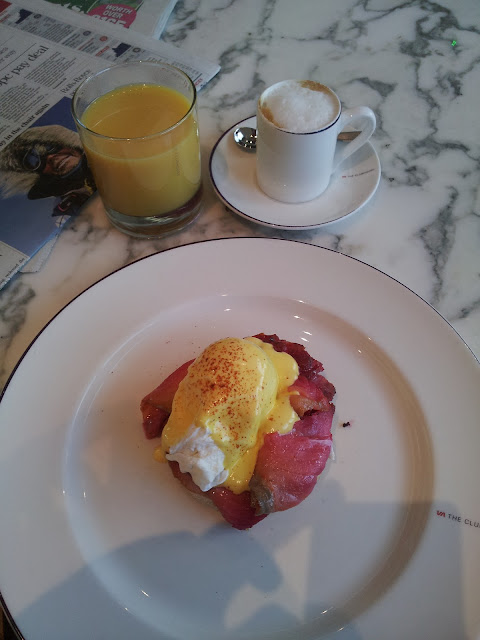 I had spotted several interesting types of smoked salmon at the deli bar and asked to substitute the regular salmon for beetroot cured. Delicious.

I then spent some time in the business area, printing off maps, hotel confirmations and a few basic Japanese phrases. After this I headed past the Grey Goose loft, up to the stairs to enjoy some champagne on the,gloriously sunny rooftop. As a tie-in with Wimbledon, the rooftop featured a miniature tennis court and tennis themed decor. I sat back in a lounge chair and enjoyed another glass of champagne whilst taking a few pictures of the aircraft. 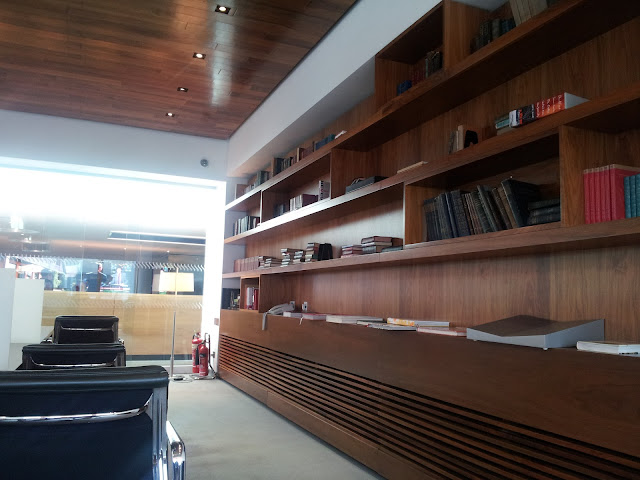 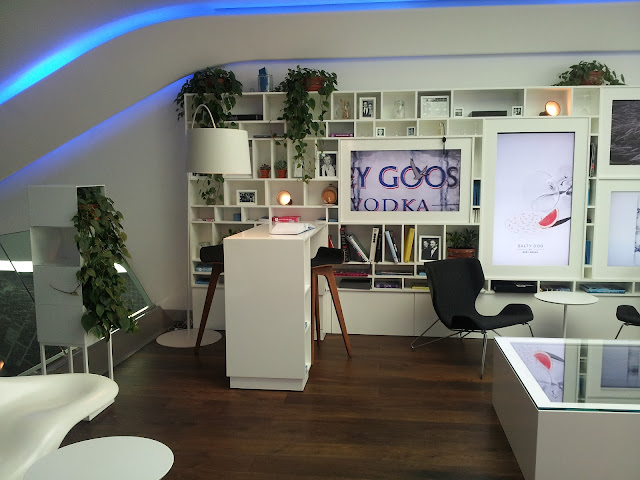 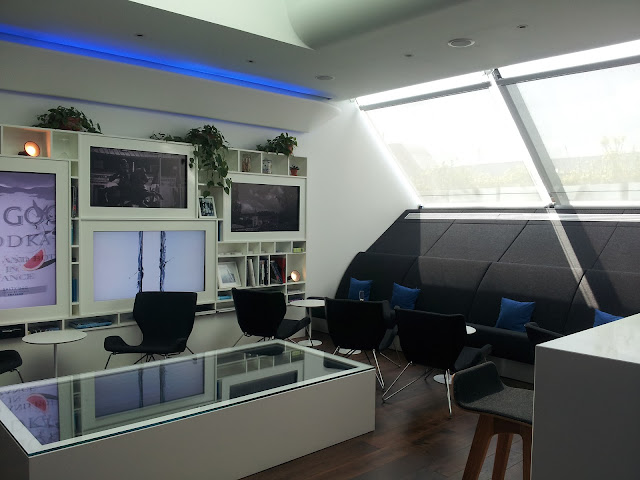 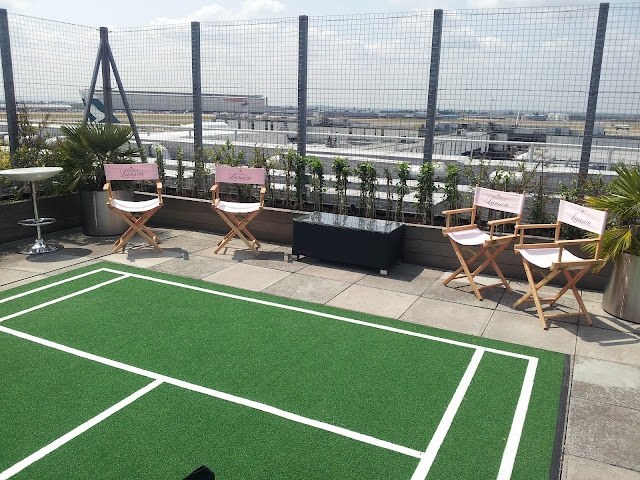 After such a hard morning of relaxing, I’d worked up quite a hunger. I headed down to the restaurant and helped myself to 3 different types of smoked salmon as well as some toasted sourdough and rye.

I had a taste of the English sparkling wine; having often seen this on restaurant menus, I could never force myself to pay champagne prices for British wine. The verdict: Not bad but not fantastic either. I moved on to some sauvignon blanc and knowing there was very little time to go, went to see if the shoeshine man could polish a second pair of shoes (my trip was a for a friends’ wedding and a I wanted to make sure that my formal shoes were sparkling on the big day). 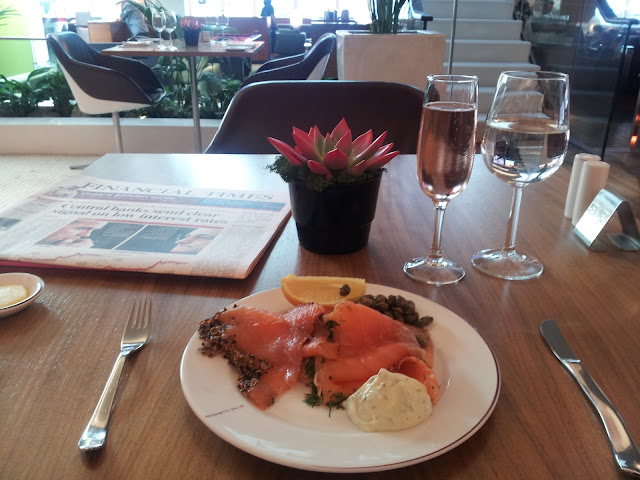 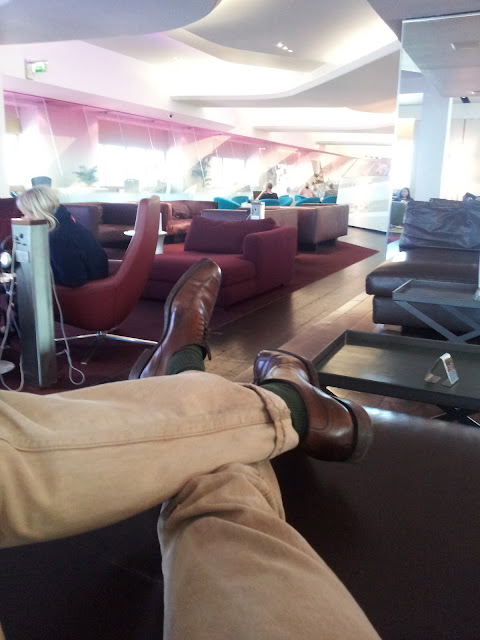 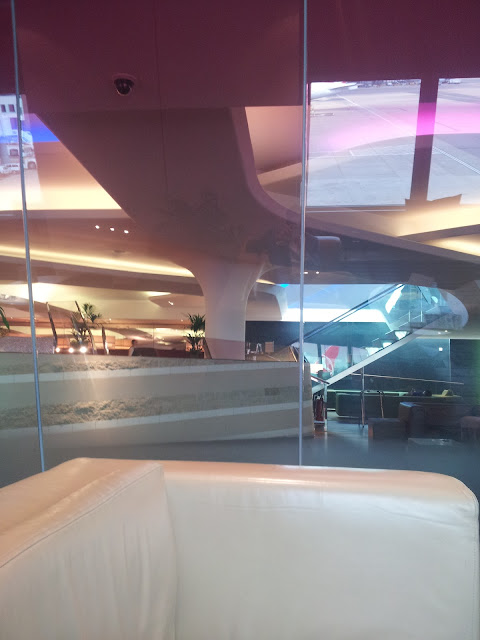 I finished up my drinks picked up my shiny shoes and headed to the plane. I had a seat just near the curtain, facing ‘the wall’. I was greeted by name and brought a G and T as well as some popcorn. 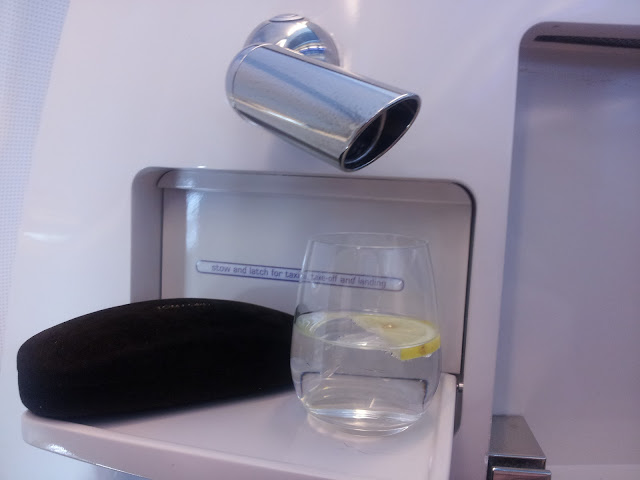 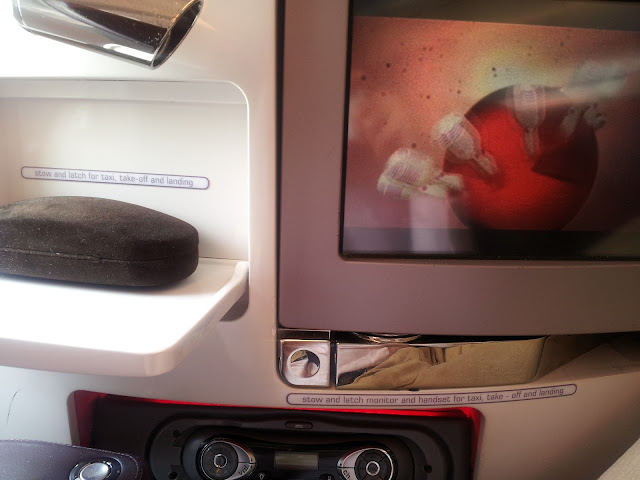 The cabin crew were absolutely fantastic and really made this flight for me. Hot towels were taken away immediately. I was always greeted by name. Every time a member of crew walked by, they would check to see if any empty containers needed collecting or if I had none, I was asked if I needed any food or drink.

Suffice to say, I was never too far from the next glass of champagne! 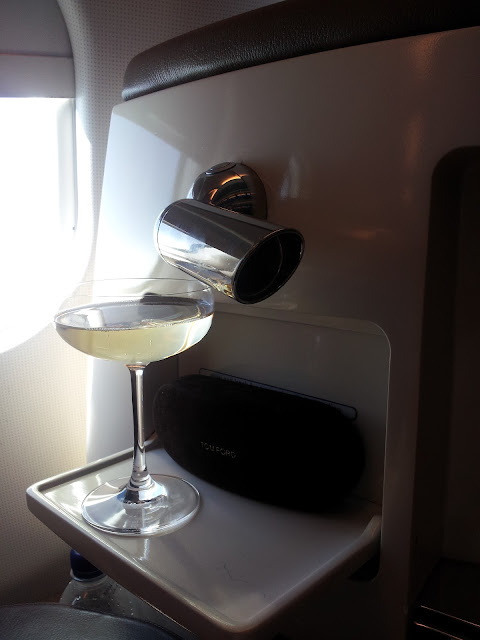 For lunch I ordered the Japanese starter and the beef course. Both were delicious, as were the wines that I tried. I was offered a taste before being poured a full glass (nothing worse than having a full glass of a drink you don’t want, on a plane). 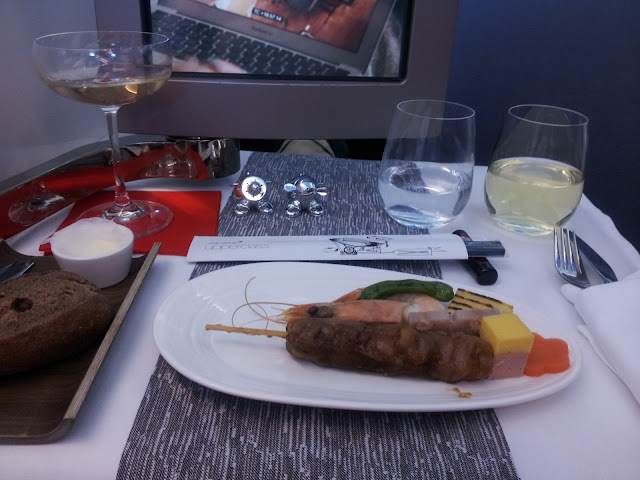 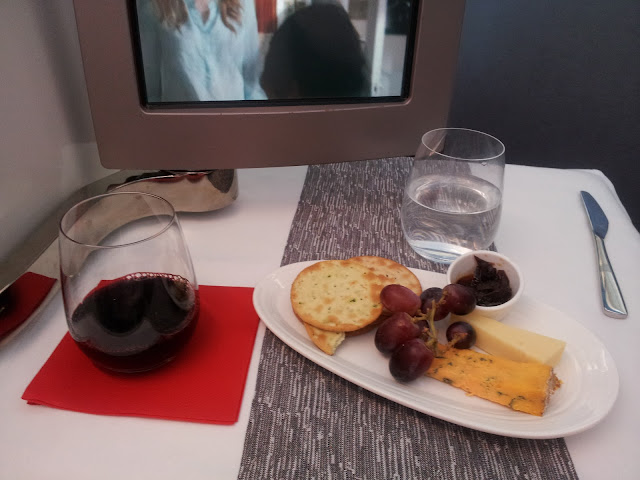 Later on, I tried the chicken satay skewers from the graze menu, the FA said they had a few on board so he took the liberty of giving me a double portion. y)

After watching a couple of movies, I decided to grab a glass of cognac form the bar, to help me get to sleep. About half way through drinking it an FA made the rounds with some ice creams.

In a moment of unparalleled genius, I ate a couple of spoonfuls of the ice cream, and then poured the remainder of the cognac into the tub. The mix of booze and carbs was enough to send me into a peaceful sleep.

I awoke just before the breakfast service, and ordered the full English with a double espresso. [rant mode] Having espresso on board is a big deal to me. I once flew F on United and was only offered “dirty water”, after this I vowed never to set foot on one of their planes again. Really, there is no excuse for rubbish coffee in this day and age, especially not in premium cabins. [rant over]

Just before landing, the plane started to wobble a bit. Despite the sky being crystal clear, we had been warned that there would be some crosswinds upon arrival in Narita. As we made our descent the plane was swinging around pretty wildly. I’ve flown a fair amount in the past and was still somewhat tranquilised by the excellent drinks service, even so, I was a little worried.

At a few hundred metres out, suddenly the engines roared to life and we blasted back up for a go around. This was my first ever go around and I have to say, it felt pretty awesome, I can only imagine what a go around must feel like on a 747!

The captain was quick to address everybody on the P.A. and apologise for the rather brusque manoeuvre. After 15 minutes in a holding pattern we circled back around and landed safely (albeit with a fair amount of cross wind, still keeping things interesting).

All in all, I find it hard to fault the overall experience.
The faulty barrier at the DTCI held me up by a couple of minutes.
It would have been nice to have my food delivered to the clubhouse roof but I was able to take deli plates up there myself anyway.

That’s it. Other than that, faultless. By far the best business class experience I’ve ever had.
The service in the air was spot on.
The clubhouse is, in my opinion, markedly superior to the Thai 1st class lounge at Bangkok Suvarnabhumi (and the ticket needed to access it, much cheaper).