Eating and drinking our way around Dubai (September 2014)

The location of the PH makes getting to DXB incredibly easy and stress free. We enjoyed a final swim and a leisurely breakfast before checking out. We were taken by one of the PH sedans as QR doesn't offer a complimentary limo service.

The regional terminal at DXB is quite a different beast to the sparkling new Emirates facility. This was more along the lines of Wichita or Bournemouth than an international hub.

There was a lot of scaffolding and hoarding around, indicating that work was being done to improve things but really, QR have it tough trying to deliver a premium experience out of such a facility.

The lounge used by QR is a contract lounge which is bizarrely located, within a transit hotel. We knew the deal so planned ahead to only spend 30 minutes there. The food and (especially) the beverage selection were actually not bad. But the decor just carries this unshakeable veneer of aging sadness. 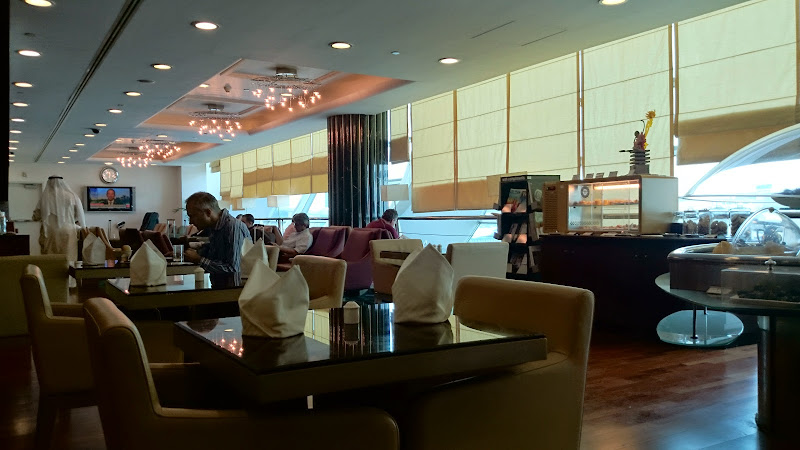 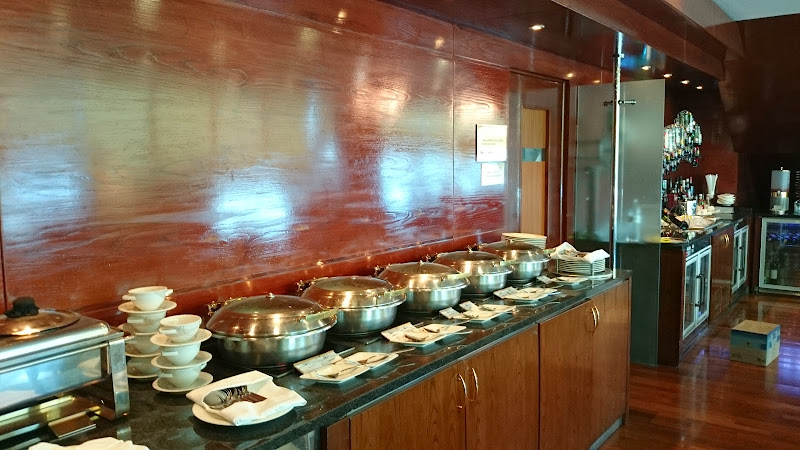 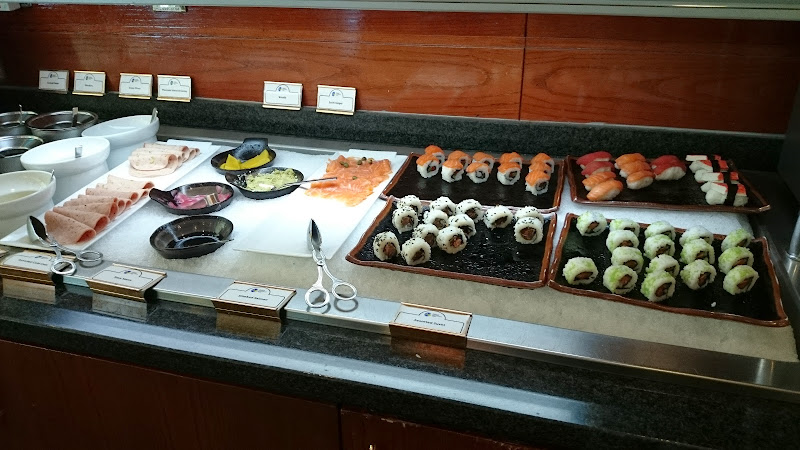 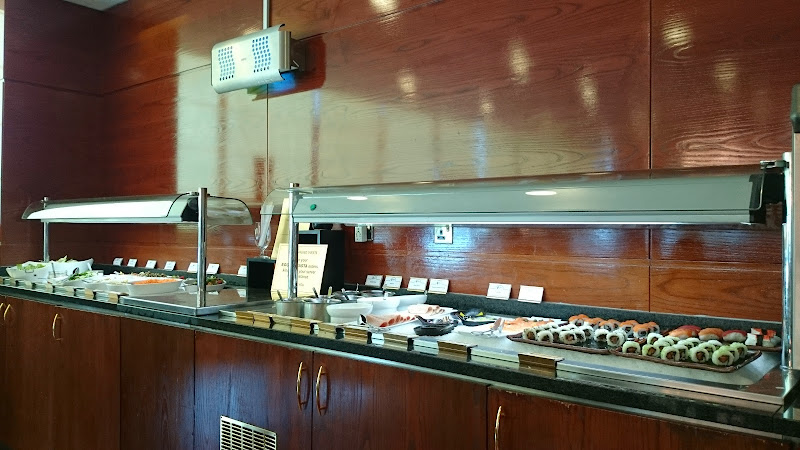 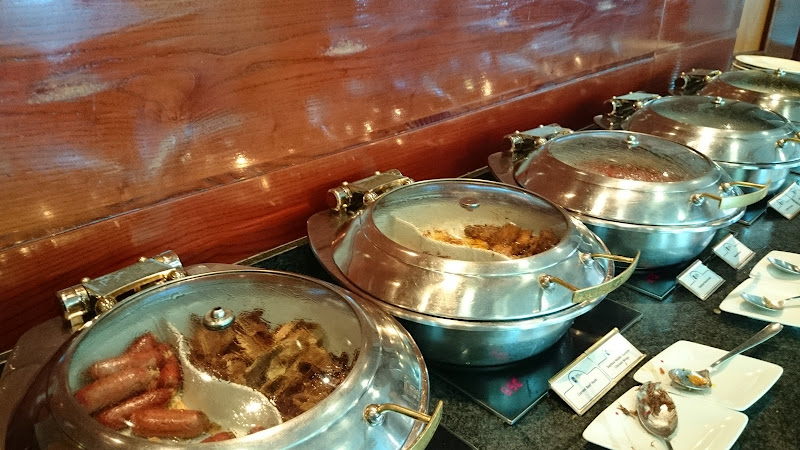 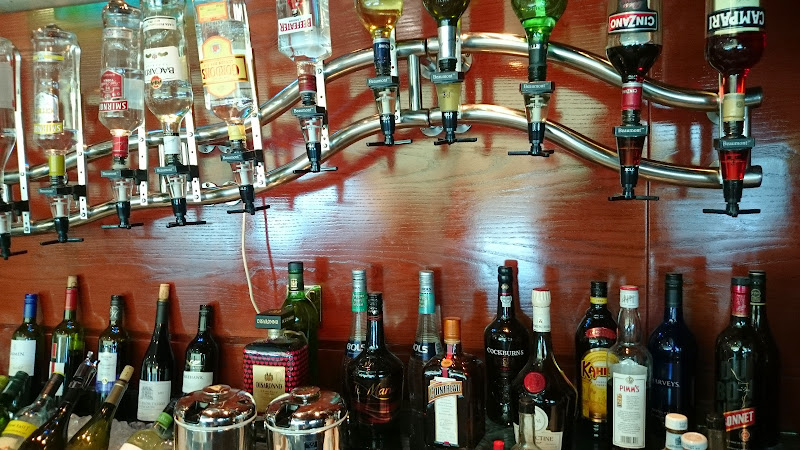 To my friends in the free pour world, those are called optics. They are the reason people don't tip at regular bars in the UK.

Soon enough it was time for us to board.

We headed over to the gate area and were surprised to see an A330 parked up. As a man who has been TG'ed more than once, a last minute equipment change usually brings with it a sense of dread.

In this instance it brought a chance to familiarise myself with the product which would be flying us the rest of the way home. There was only one other passenger with us in the F cabin. Beyond us was a completely empty J cabin followed by economy, somewhere in the distance. 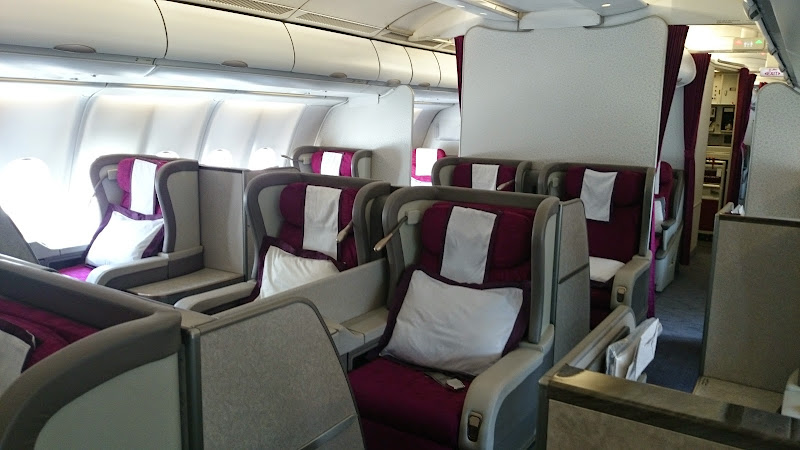 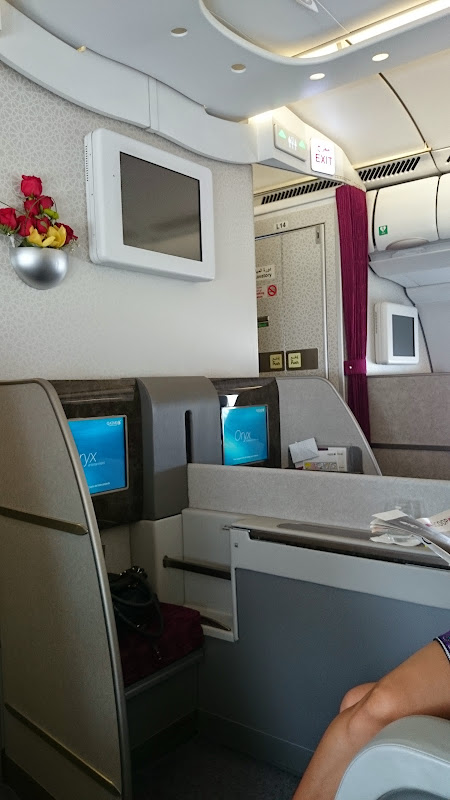 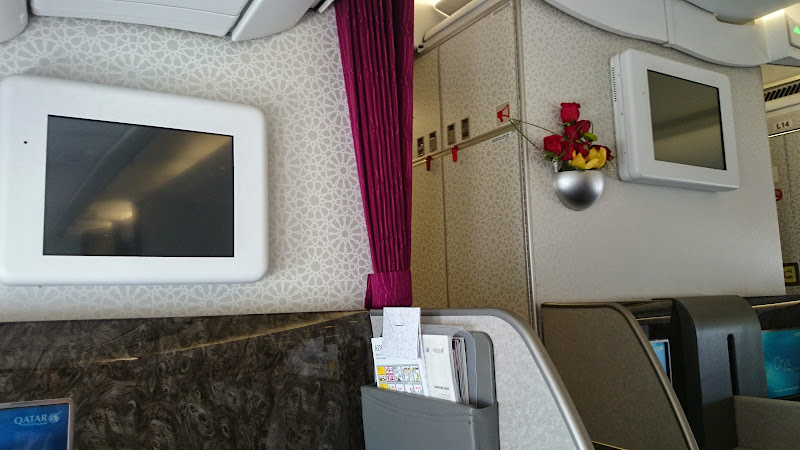 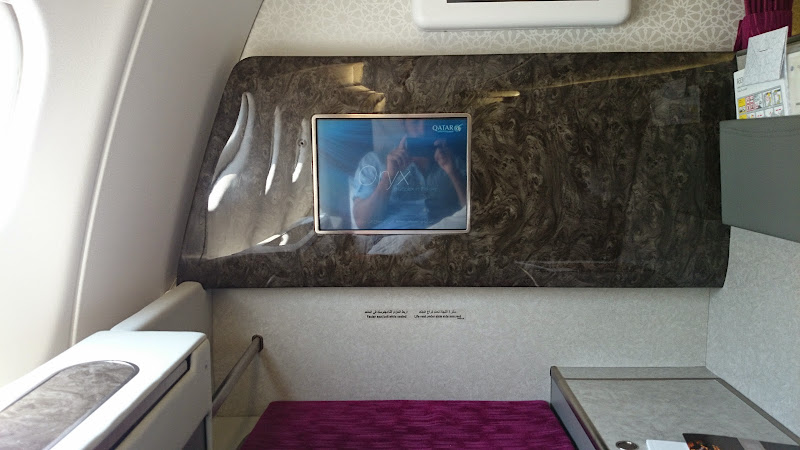 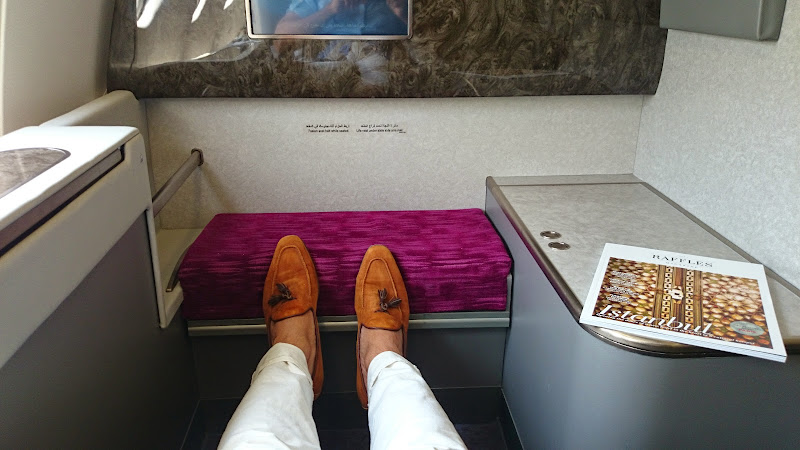 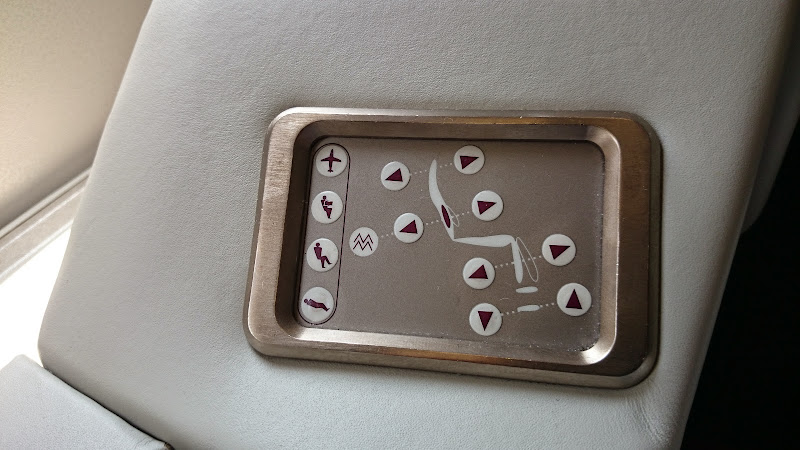 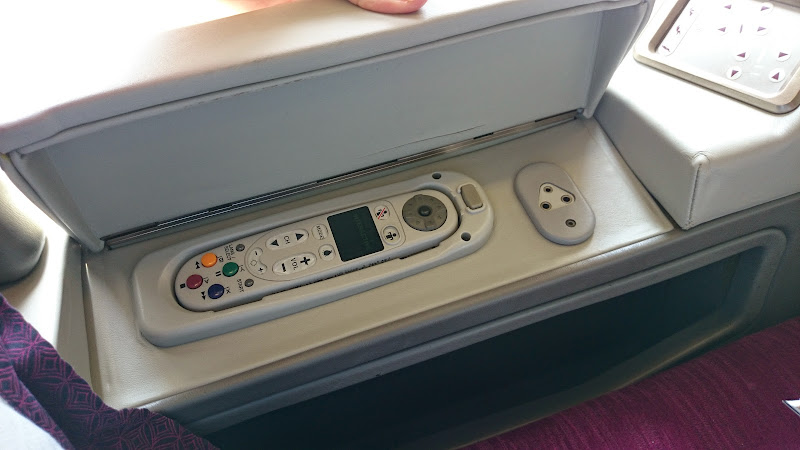 We were warmly greeted and offered PDBs and menus upon boarding. I just went with water and was asked to order my meal and drinks pre take-off as the flight is so short. 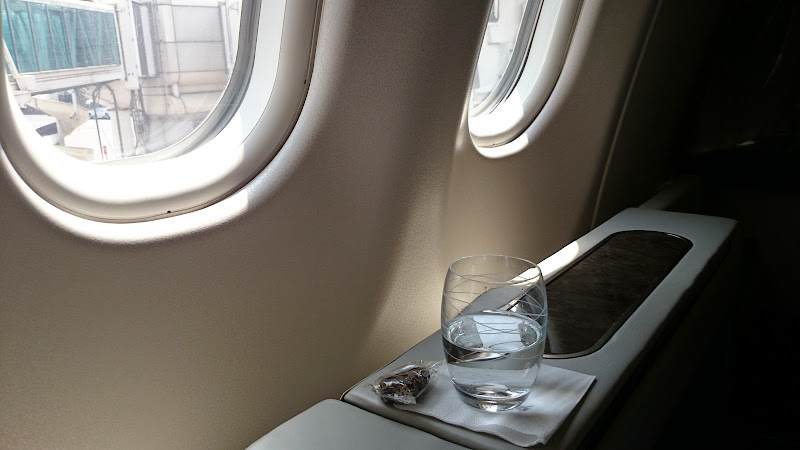 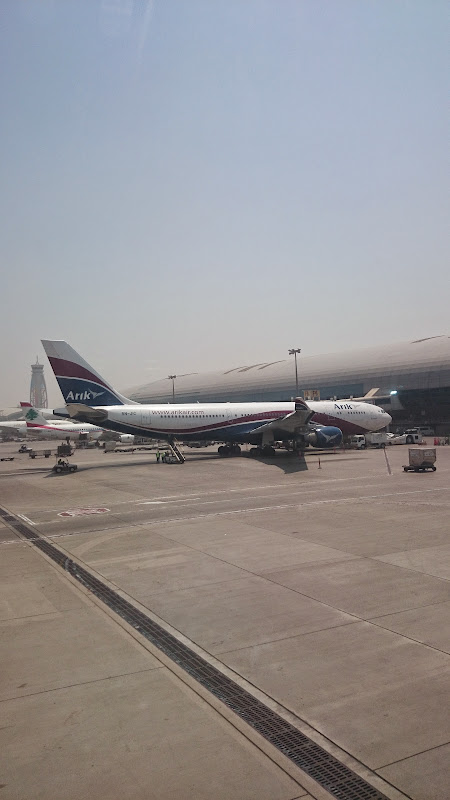 It's not every day you see one of these parked next to you.

I said I'd have a macchiato with my lunch as I was still in more of a breakfast frame of mind.

Another FA cam around offering Arabic coffee and dates but I declined the coffee and just took a date, saying that I'd wait for my macchiato later.

Moments later the first FA came out saying that I'd mentioned my macchiato, did I want it now? I said that no, I was happy to wait. She seemed quite relieved that no service error had been made.

However she did notice that I'd been trying to get a stain out of my white trousers, using my water. She said she had something better and came back moments later with a special clothes cleaning spray and a choice of hot or cold towel to assist in the process.

The cleaning spray worked really well. "I'm so glad, they look perfect!" said the FA. The ME3 crews get accused of being a little cold at times but this FA was far from it.

We took off on time and swept along the coast, with great views of Dubai below. 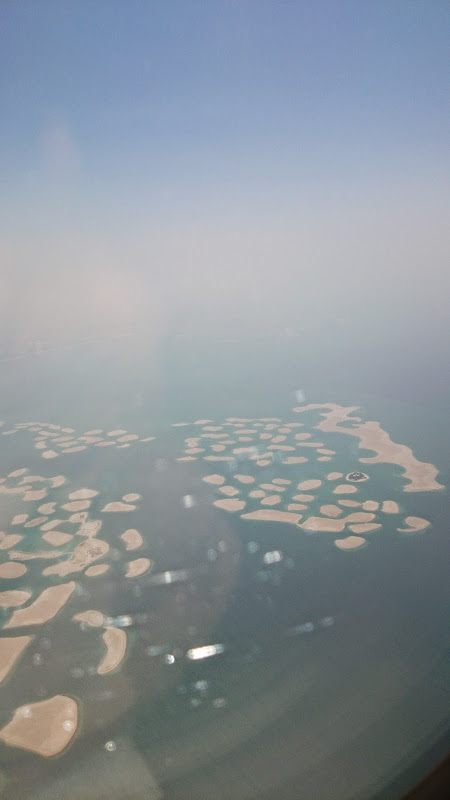 The World. A work in progress

I opted for the chicken tikka which was served alongside a pudding, on a single tray, absolutely understandable given the flight time.

The food was pretty decent, though unmemorable. 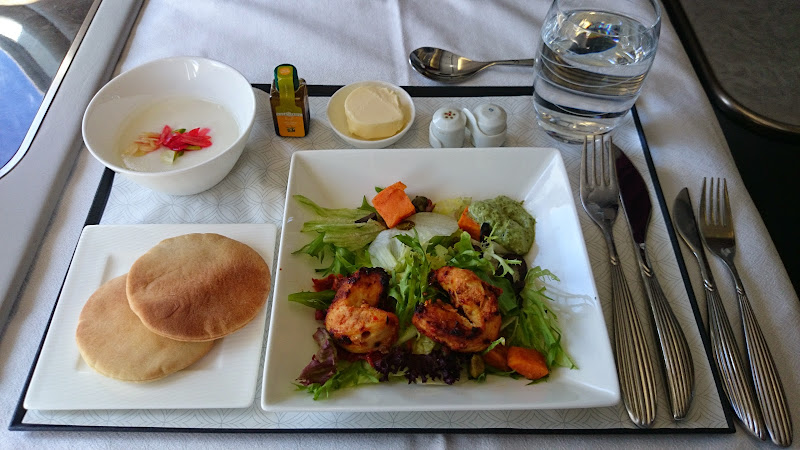 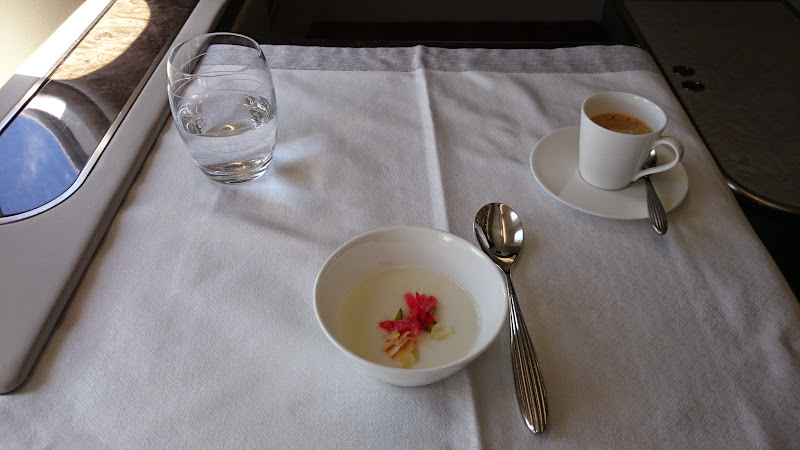 My coffee was excellent. I don't know how some airlines can still get an espresso wrong in their premium cabins.

Within a few minutes of clearing the tables the cabin crew were preparing the cabin for landing. 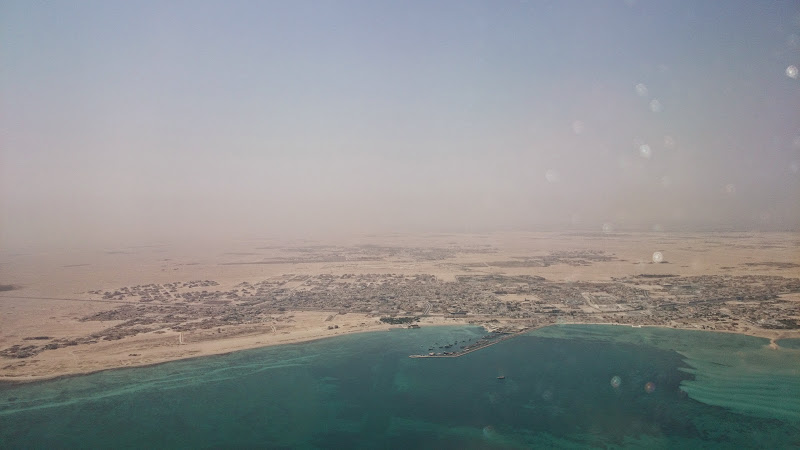 For a one hour flight, this was about as good of a product as you could hope for, short of flying private.