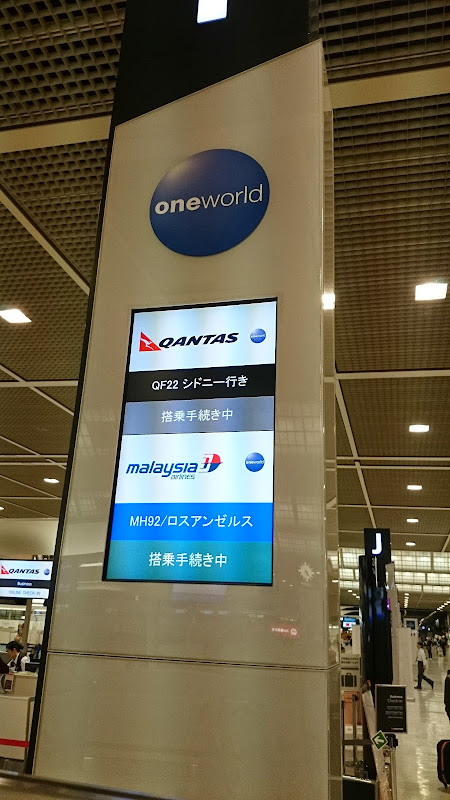 After five incredible days, it was time to bid Japan a brief farewell.

QF award space between NRT is pretty scarce, so K and I were happy to be able to secure seats 330 days out. At the time NRT-SYD on flat beds was only possible on this flight.

My parents decided to join us for the Japan section of our trip later on, by the time they started looking for flights, there was nothing available on QF but a couple of seats were available on JL, in cradle seats.

JL now serves this route with a 77W aircraft, so it is now possible to do this flight in F as well as JL's amazing J product

There are a couple of QF 744s that still have F cabins sold as J and we were hoping to get one of those. Alas, it was not to be. However, it is really hard to be disappointed when you're stepping into the nose of Boeing's iconic jet. In my mind there are few better places that one can spend time. 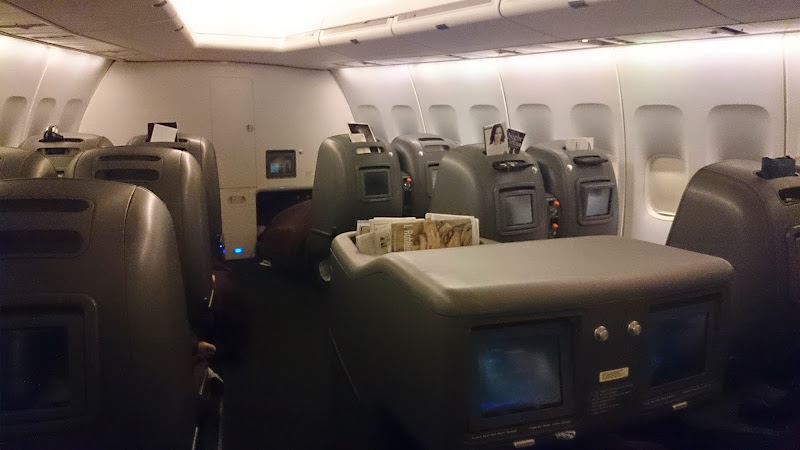 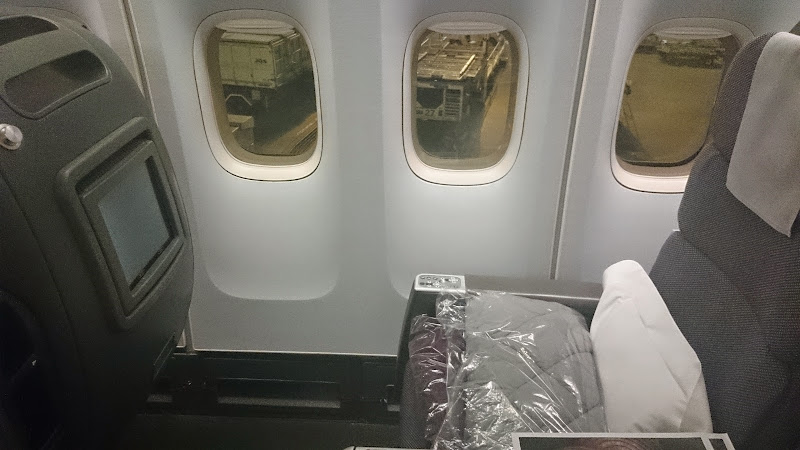 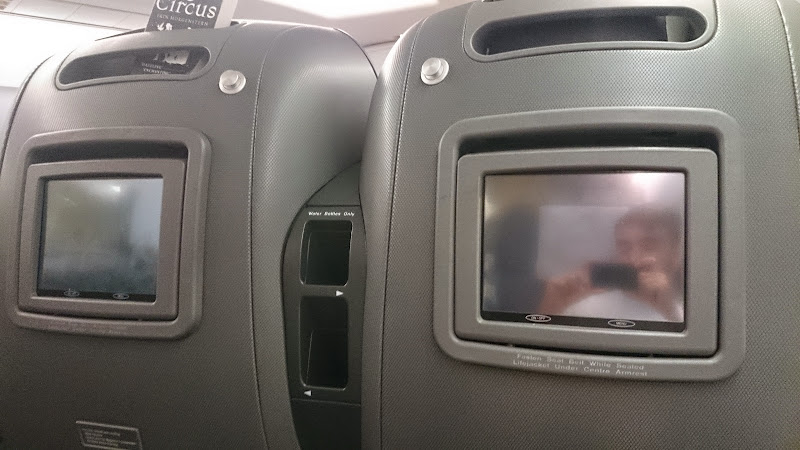 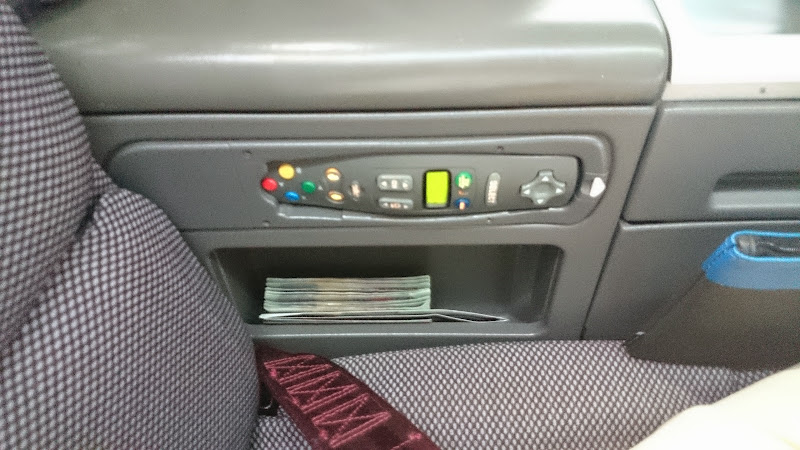 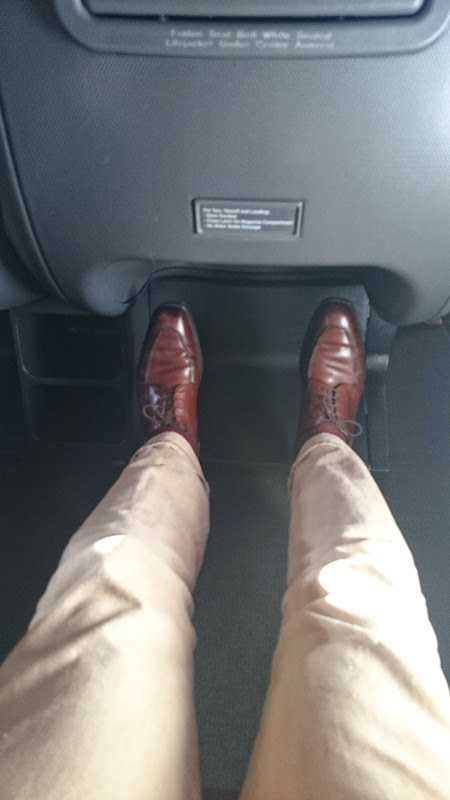 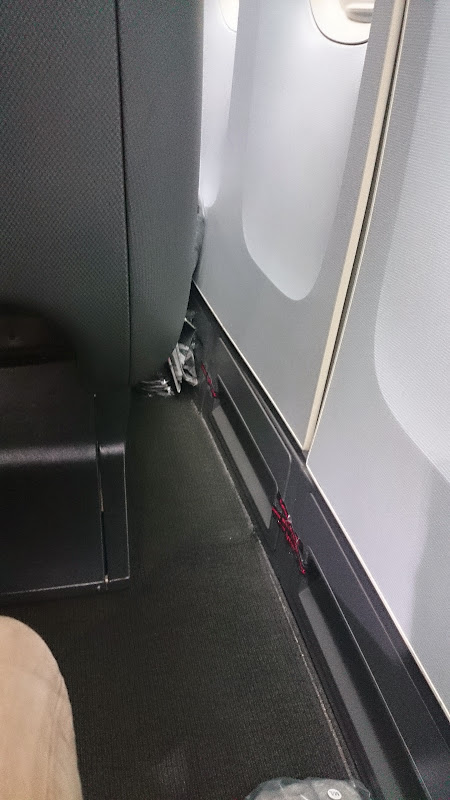 The space beds are quite sleek looking and have plenty of useful cubby holes for storage. I can't help but feel though that all the empty space by the windows could have been used for storage bins.

The crew on this flight were phenomenal. They were a little older than VS crews but their greater experience really shone through. We were immediately offered a PDB and amenity kits as soon as we sat down.

We went with champagne, of course. 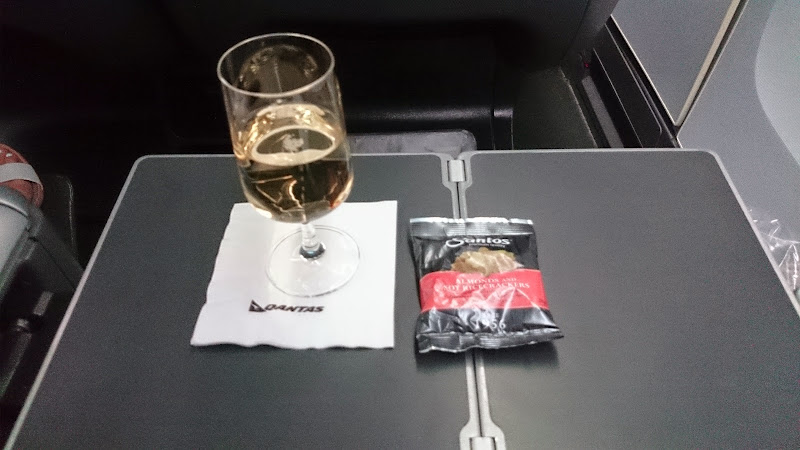 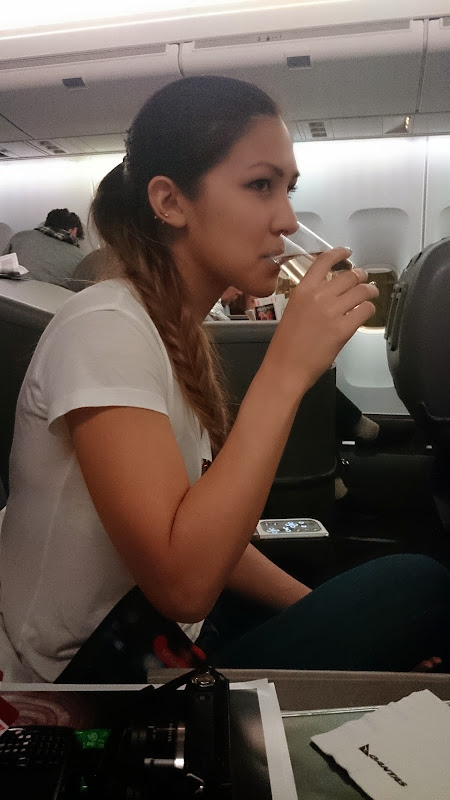 The male FA warned us that perhaps the champagne wasn't great because it had been open for a little while, so we should let him know if wanted a different drink.

As it turns out, it was fine but little service touches like that really make a difference.

There are different male and female versions of the amenity kit by Jack and Jill Spade. Here's the Jack Spade: 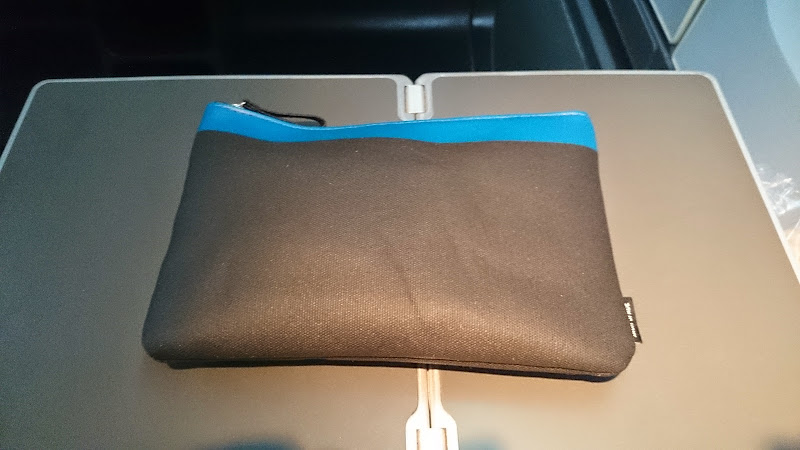 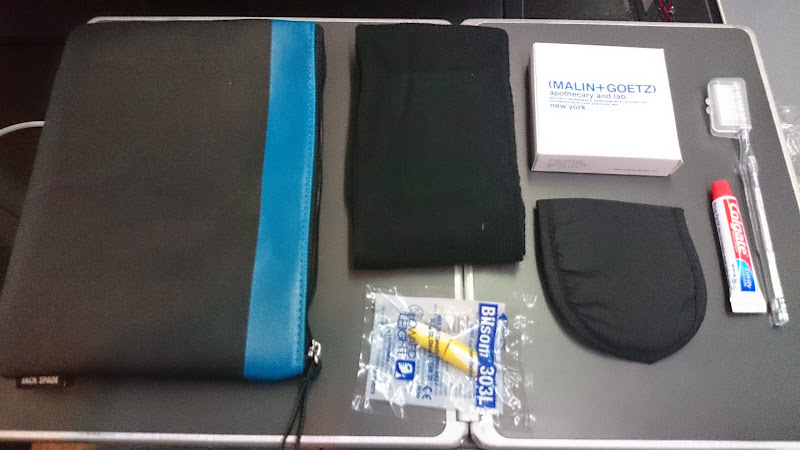 All the basics covered.

After finishing my chamapgne I quickly headed to the washroom to change in my QF PJs.

Gotta love the windows on the 744 front lav. 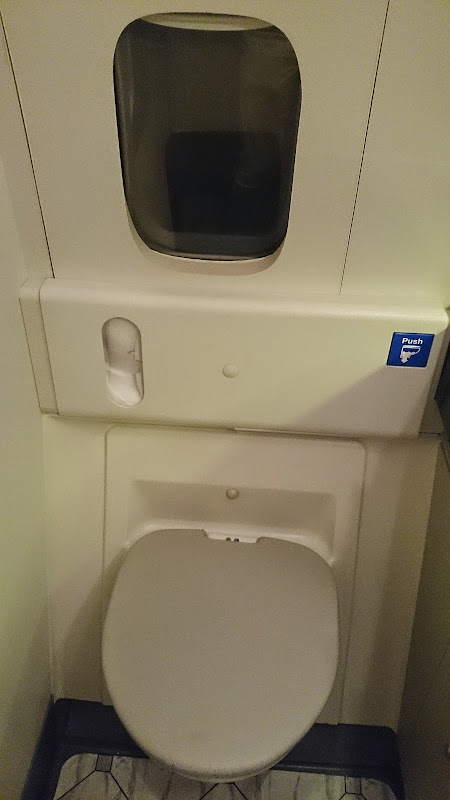 Hangers were provided for people getting changed, although the flower holder remained empty. 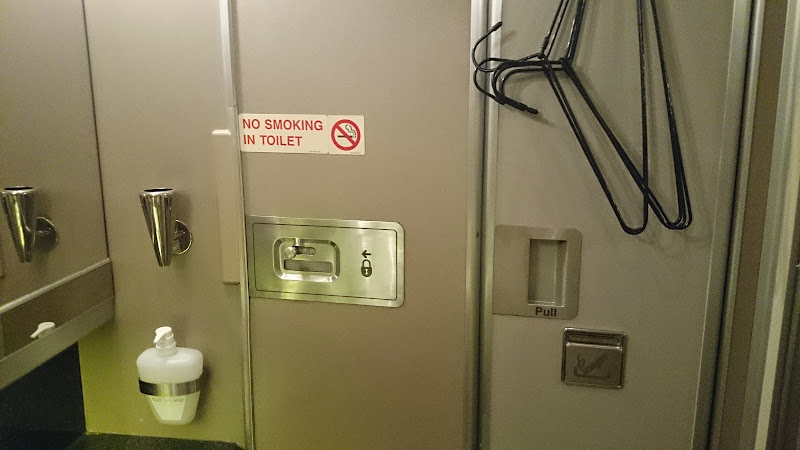 The sink and floor were pretty fancy, I'm guessing because this used to be an F lav: 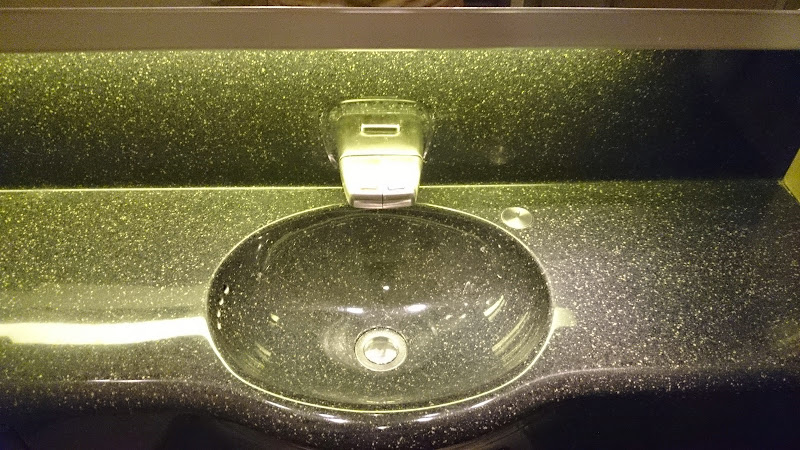 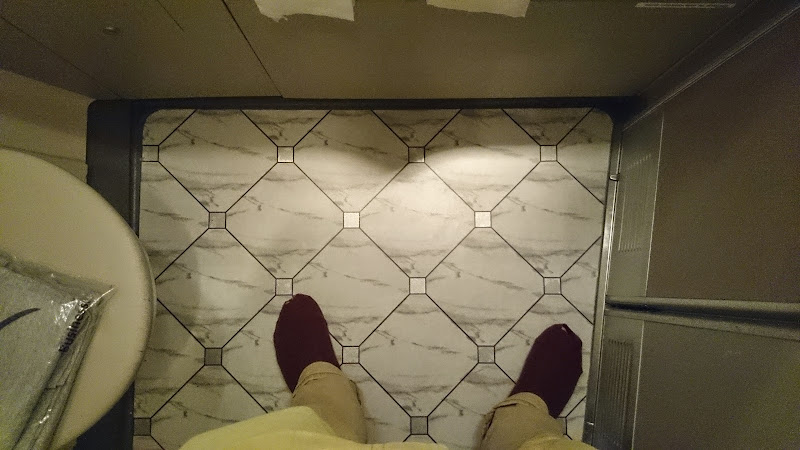 The toiletries were full size versions of those in the amenity kit. 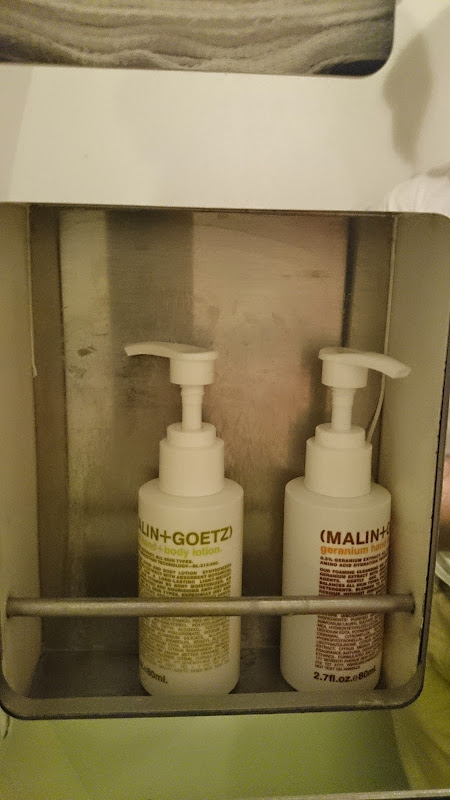 When I returned, the CSM quickly came over to introduce herself. She had made the rounds whilst I was getting changed but wanted to take the opportunity to thank me personally for flying Qantas. Again, a nice touch.

Shortly after reaching cruising altitude the meal service began. The male FA was working our side of the cabin.

The meal started with a small green leaf salad. 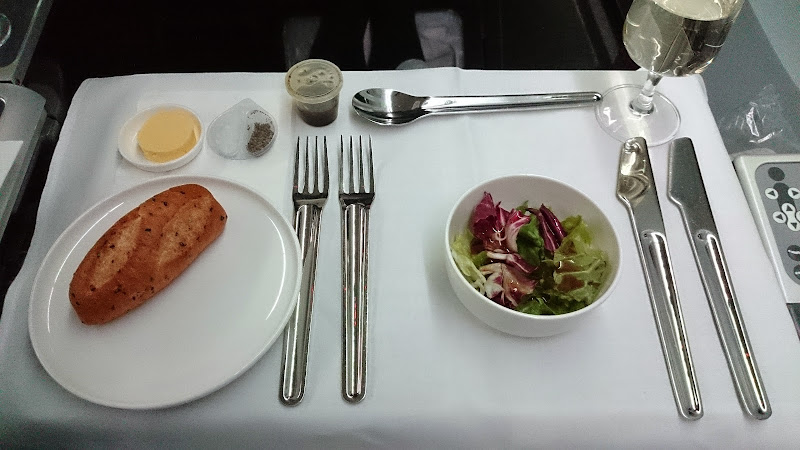 We pre-ordered the duck wraps, which were pretty much inedible. 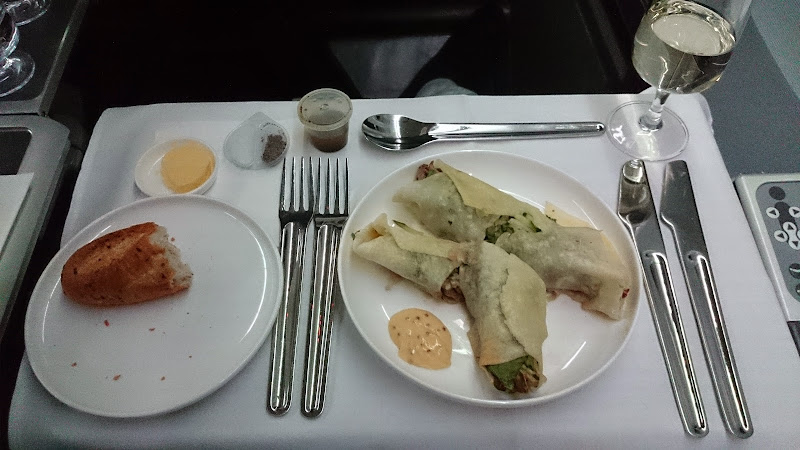 The duck tasted like chicken and the wrap was completely stuck to the plate.

The cutlery is also unbelievably cheap and obscure looking. It looks like something that come as part of a camping kit. Apparently this same cutlery is used in F, which in my view is a pretty big fail.

Despite the bad food and cutlery the QF service kept shining through. The FA was very knowledgeable about all the wines and was keen to let me try a few different ones before I decided on one to accompany my main.

I skipped dessert and just went with cheese: 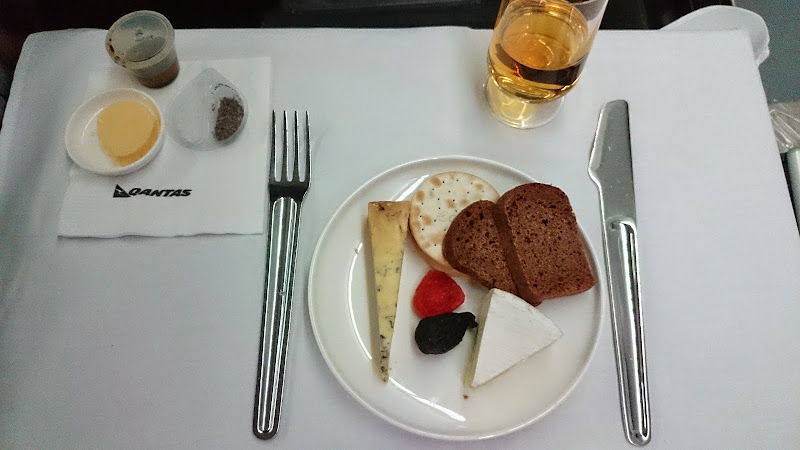 This was followed by an excellent dessert wine: 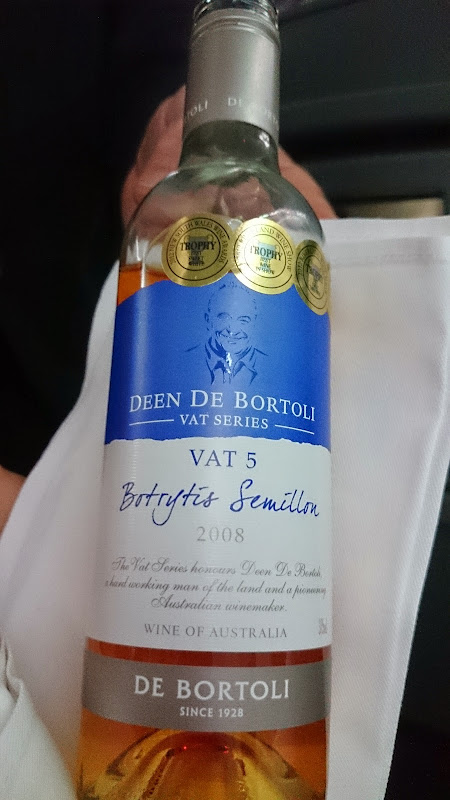 The FA went into detail about the Italian heritage of the family that produces the wine as well as explaining all of its various awards and accolades. All of which, it must be said, are well deserved.

After the meal I tried to get some sleep.

Unfortunately the bed in the 744 is not 100% flat, the foot rest sags and you do end up sliding a bit. I usually have trouble sleeping on planes and this flight was no exception. I ended up just watching movies for a few hours whilst everybody else slept.

On the plus side, this meant I was awake to see the epic sunrise 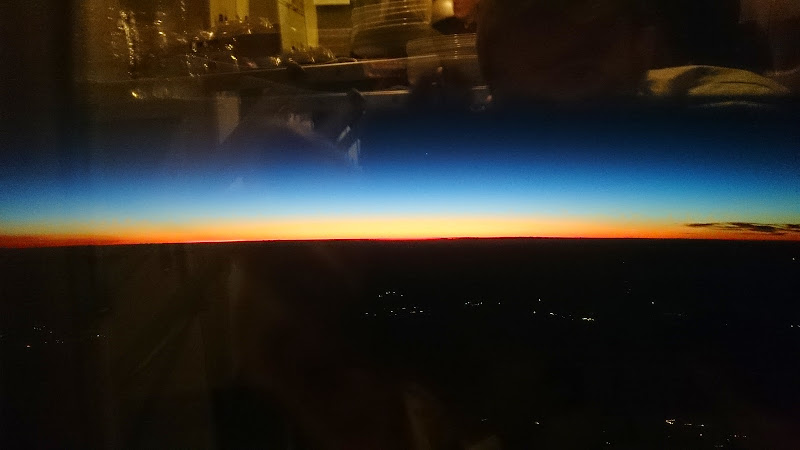 About 90 minutes prior to landing, breakfast was served. I went for fresh fruit with yoghurt and a cup of coffee. I didn't really feel like going for a hot option, given that I knew better food would be available in the lounge.

We landed on time and taxied past loads of QF birds: 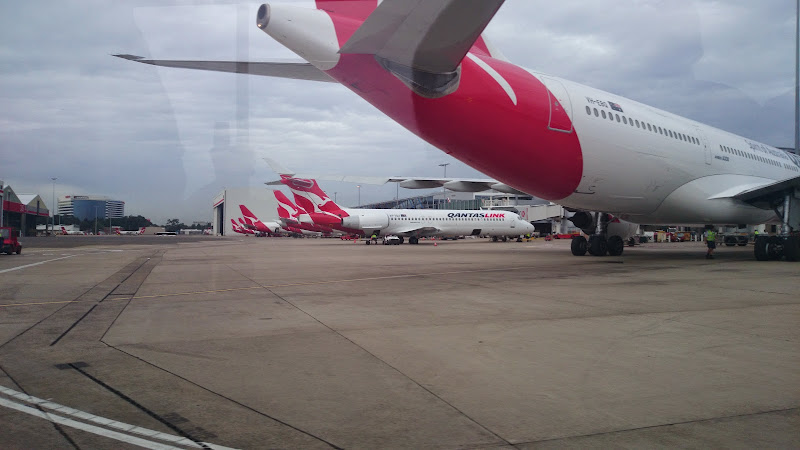