We made it to the gate mid-way through the boarding process and were quickly on board thanks to the fact that the business class queue was still being let through separately. 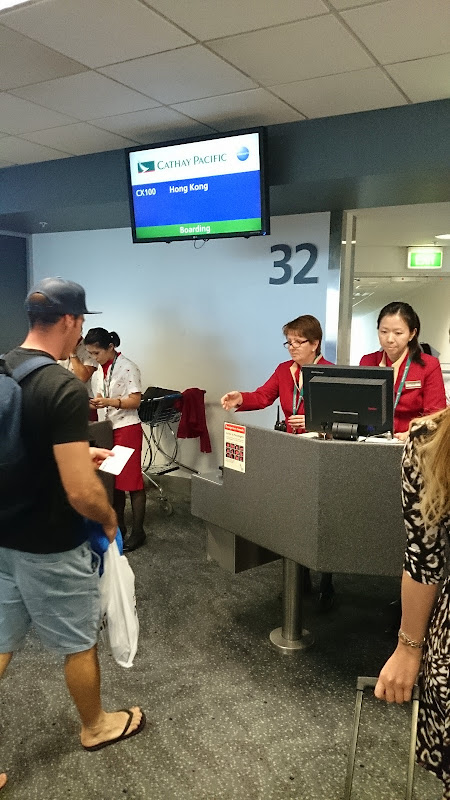 The business cabin on the CX A330 features the awesome, reverse herringbone Cirrus seat.

We were seated in the smaller of the two business cabins, the mini-cabin, which featured only three rows of seats. This gave a very private feel to the flying experience.

My seat was in the first row of the mini-cabin (19A), which could have meant extra noise from the galley. I had a feeling this wouldn't be a problem on CX, an airline renowned for the quality of the in flight service (I was right). The benefit is that you get an extra large foot cubby!

Pro tip: If you want to feel really cocooned when sleeping, sleep with your head in the foot cubby in 19A, there's plenty of room for you head and shoulders and it feels like you're in your own private cabin. 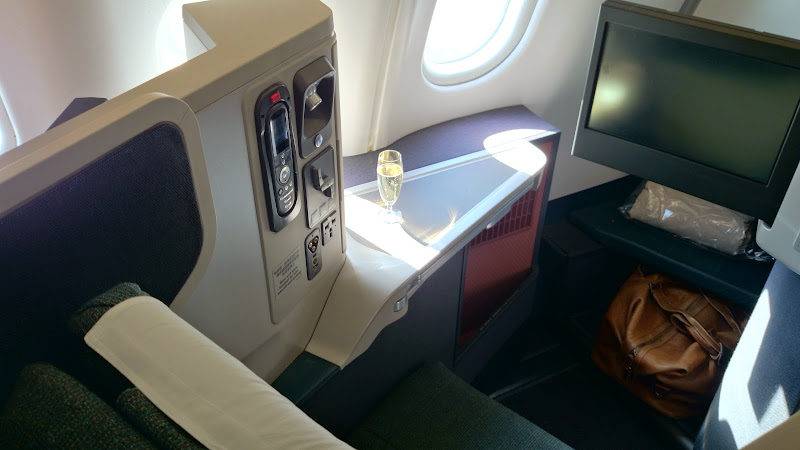 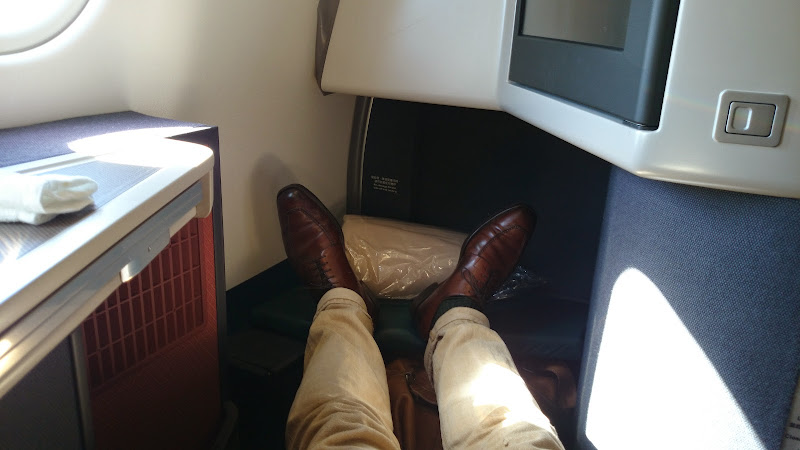 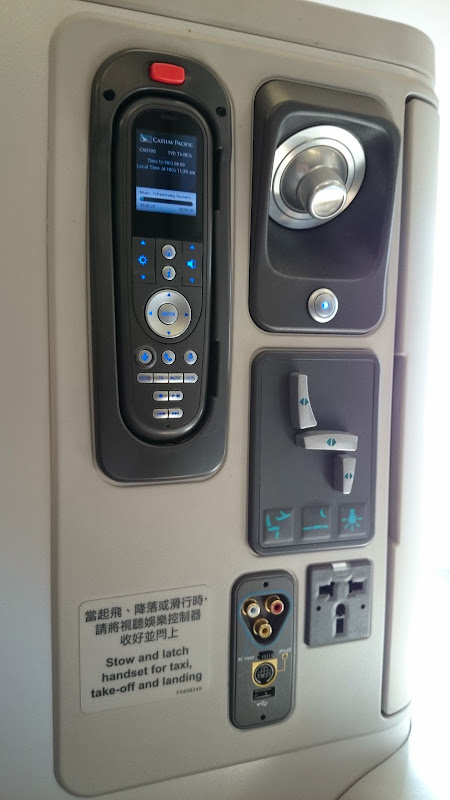 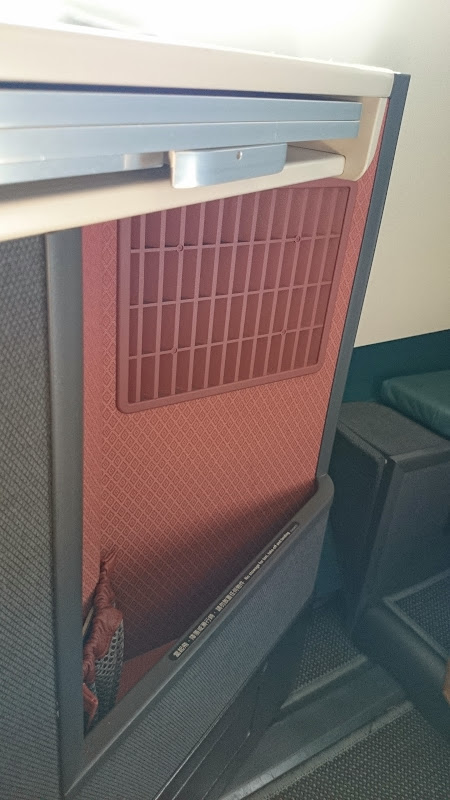 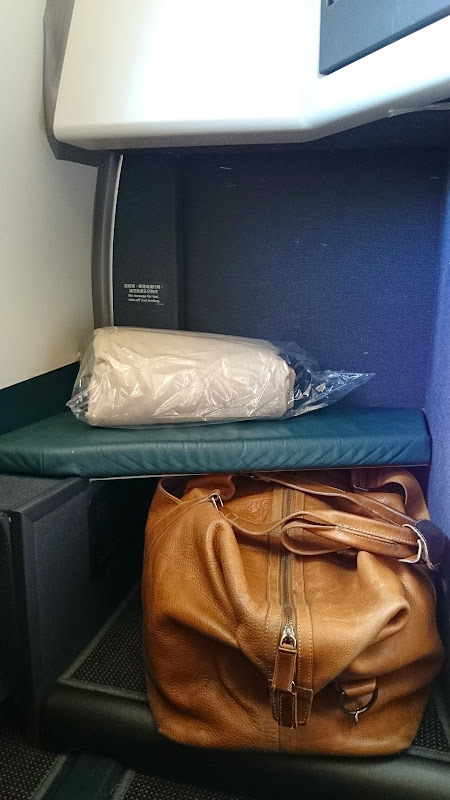 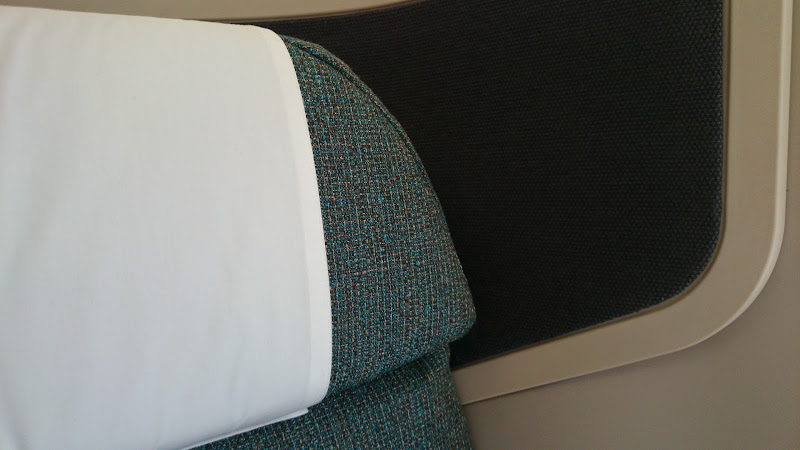 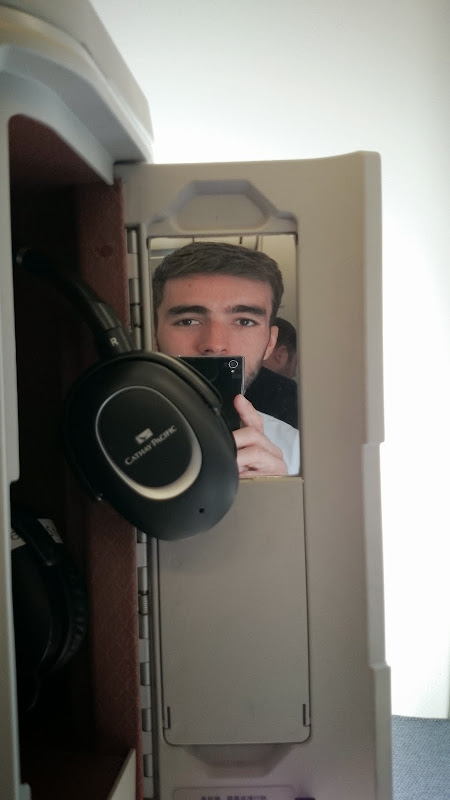 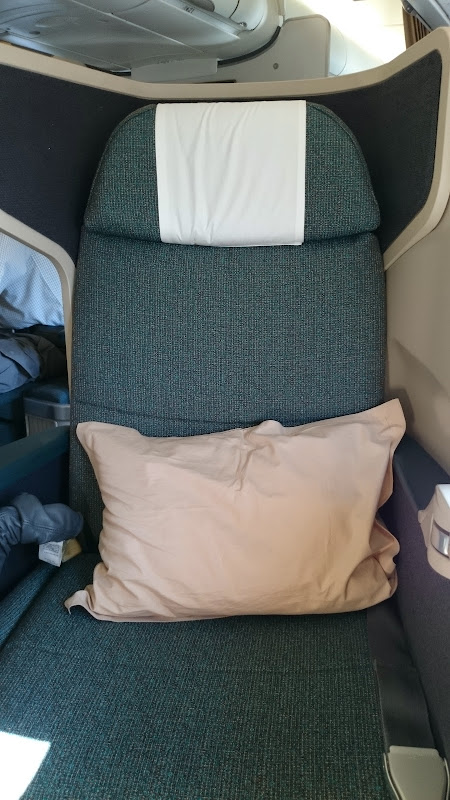 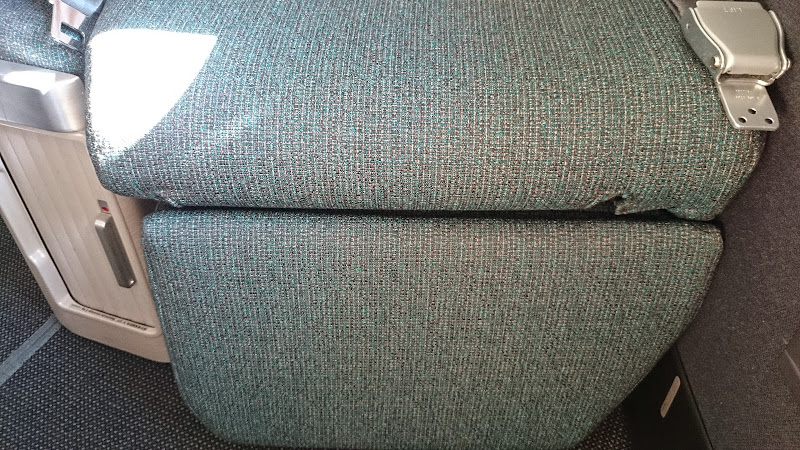 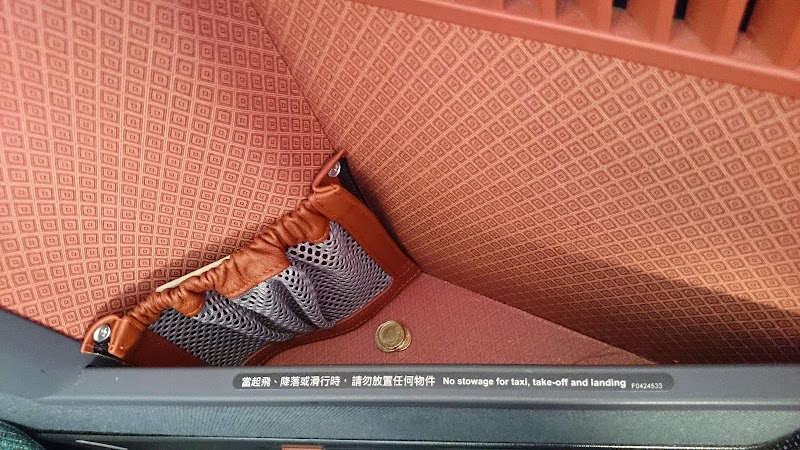 Champagne was served pre-departure and menus were handed out. 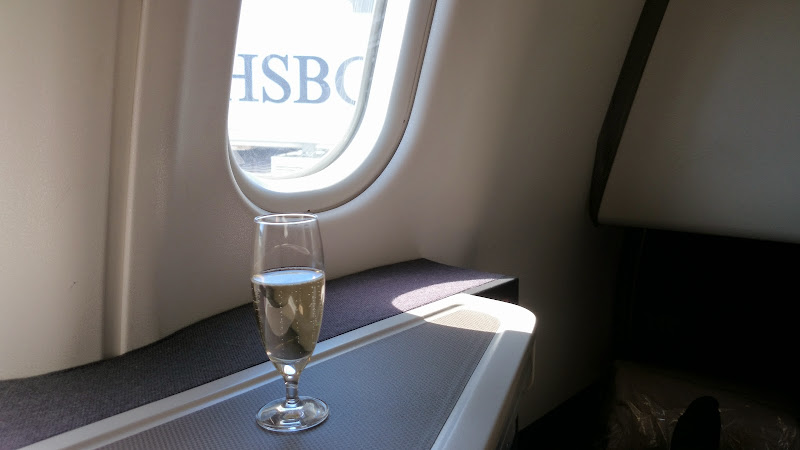 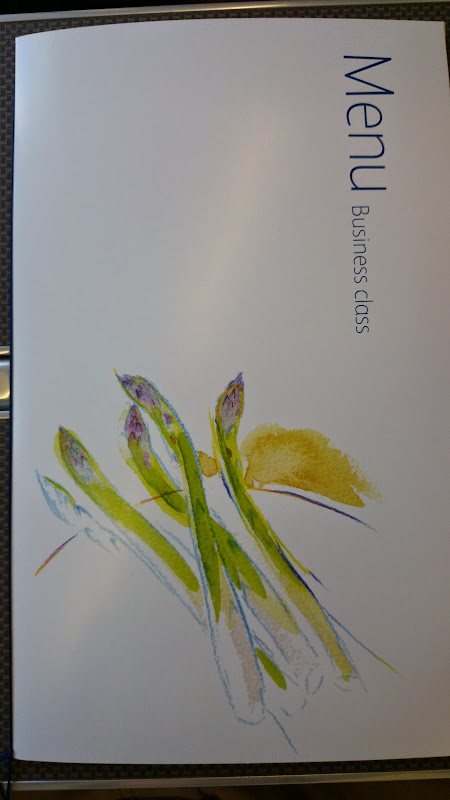 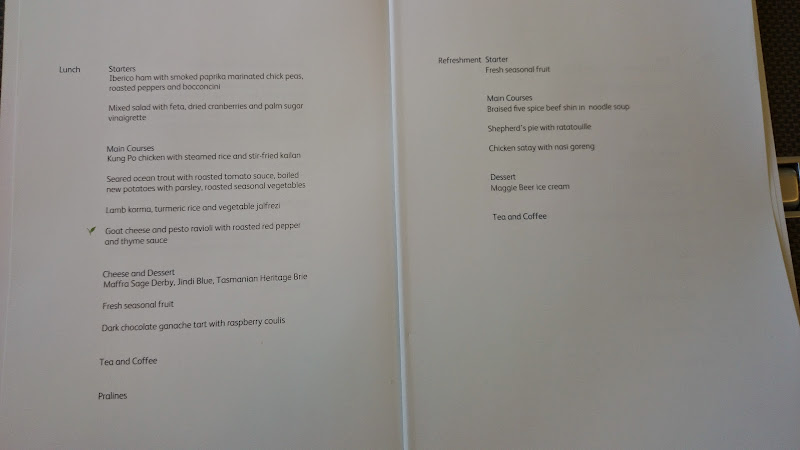 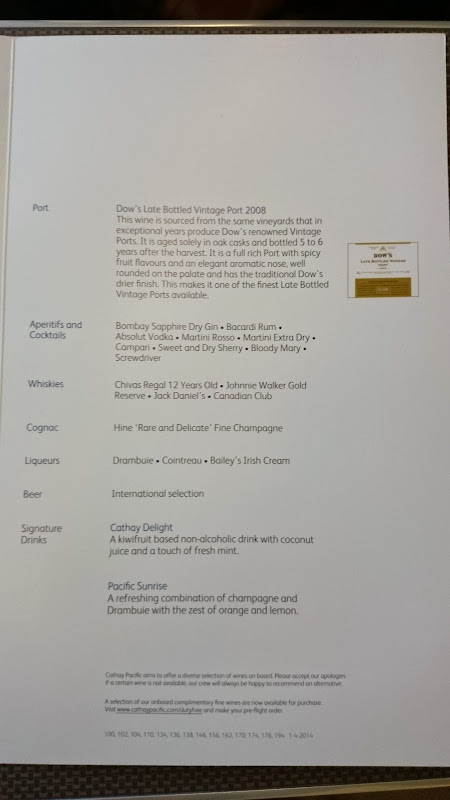 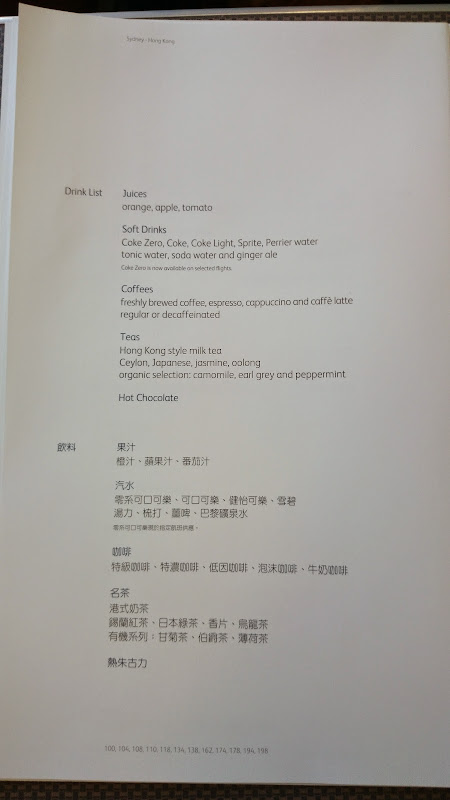 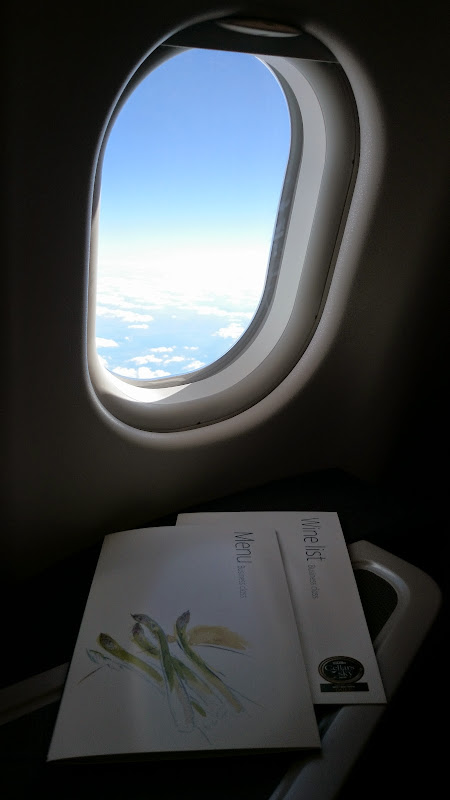 I ordered a Pacific Sunrise (champagne, drambuie and citrus zest) for my pre-meal drink. It came with a little ramekin of warm cashews. I'm not usually into sweet drinks and this was no exception. This thing was like drinking a candy factory. Still, it was nicely prepared and well presented. 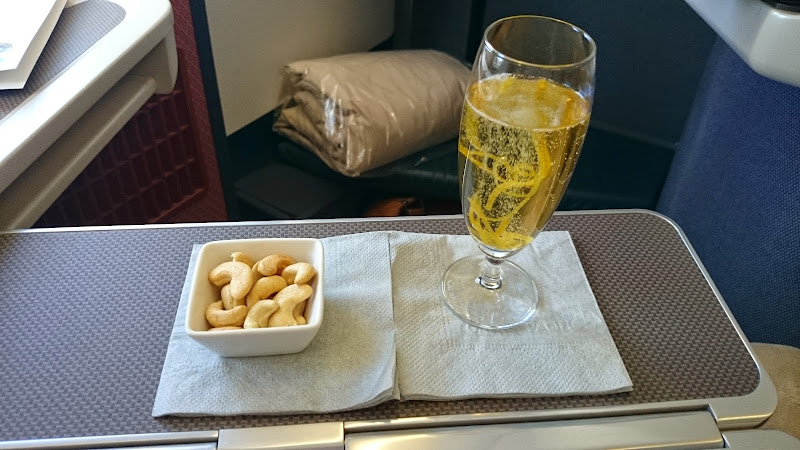 I was approached by the CSM at the beginning of the meal service, she said that I had first choice of meal as result of my CX Gold status (this courtesy was also extended to K, of course). I went with the Kung-Po chicken.

Before this I was brought a single tray with the ham starter and a small salad. 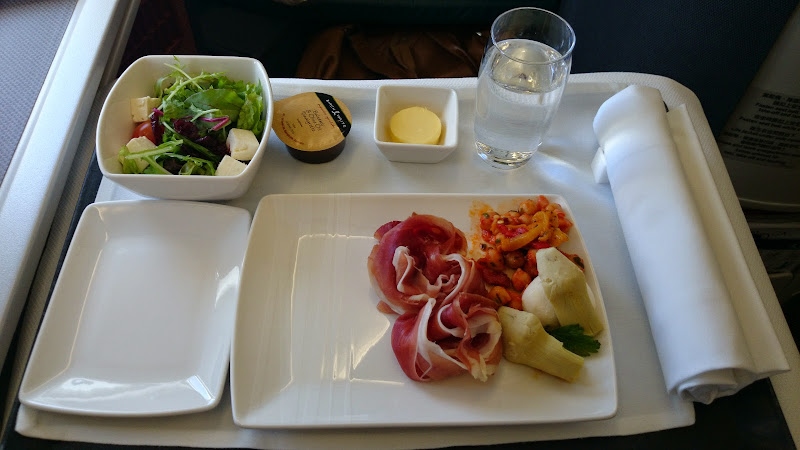 Soon after the drinks trolley came around and I asked for a glass of Sauvignon Blanc. This was met by a look of confusion from the male FA. He just stared blankly at me. "The white wine, from France". He pulls out a bottle of red wine.

I know there can sometimes be a language barrier on foreign carriers but I wasn't expecting this on CX.

The ultra-professional CSM quickly rushed over when she saw what was going on and took over for the remainder of the drink service.

The Kung-Po chicken was pretty good, not ground breaking but decent. I think that in J the best foods have a decent amount of sauce and hopefully a bit of a kick to them too. Chinese and Indian dishes tend to be sure fire hits. 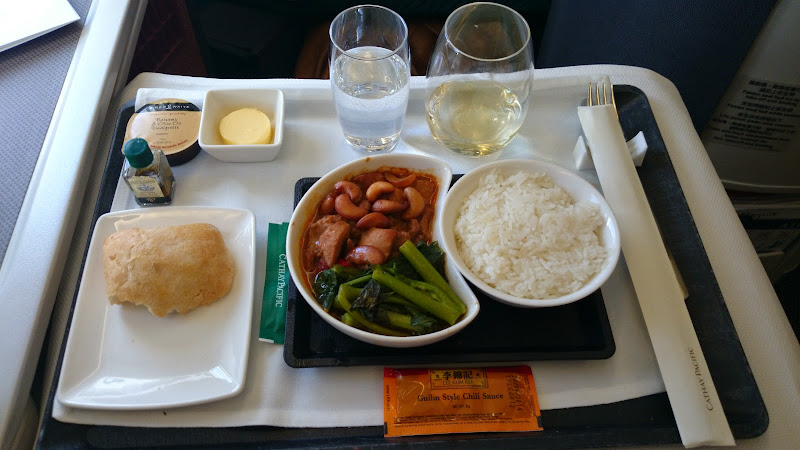 After the main course, cheese and dessert were served.
I went for a selection of cheeses, with fig cheese and port: 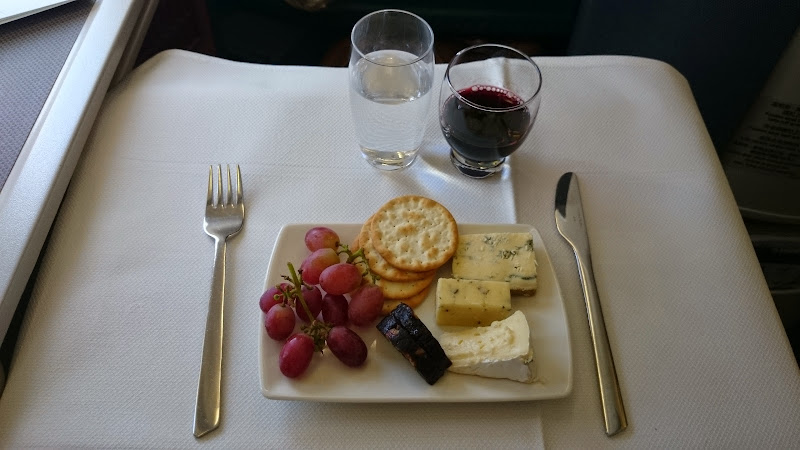 Whilst K opted for the dark chocolate ganache tart: 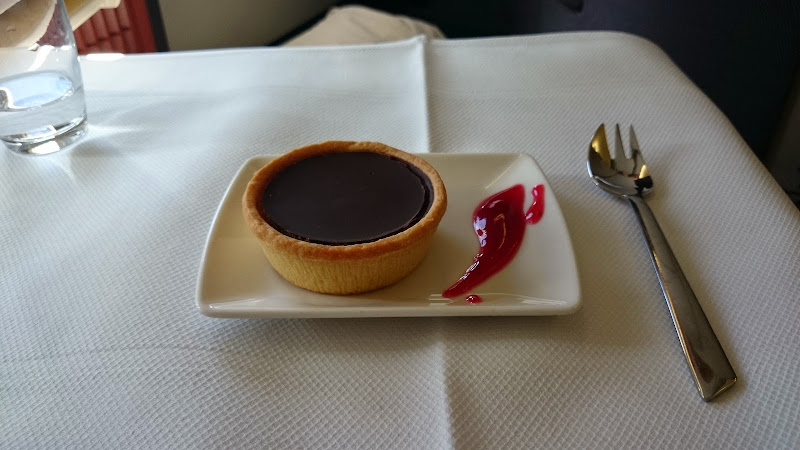 To end the meal service tea, coffee and chocolates were offered.
I asked for espresso but ended up getting what amounts to a very small filter coffee.

Attempt number two was marginally stronger but I'm guessing the CX A330 just doesn't have an espresso machine. 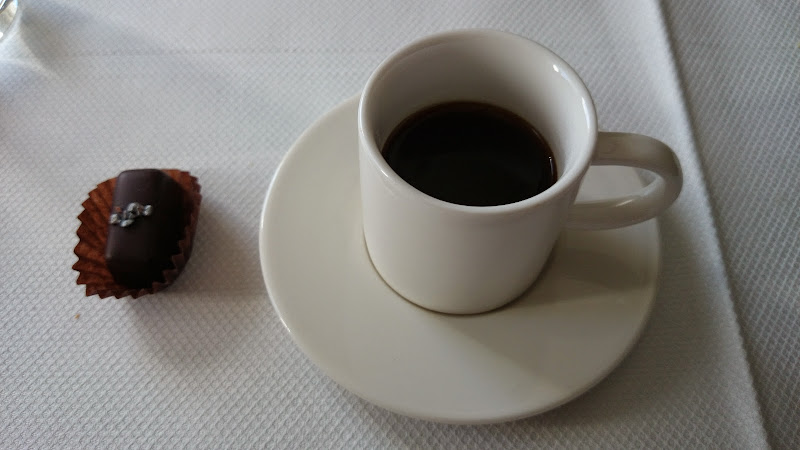 At this point I was pretty full and looking forward to relaxing with my book and watching the world beneath me go by.

Unfortunately the male FA from earlier had other ideas. Without asking, he leant over me and closed my windows.

I immediately opened them again, so I could continue to enjoy the view: 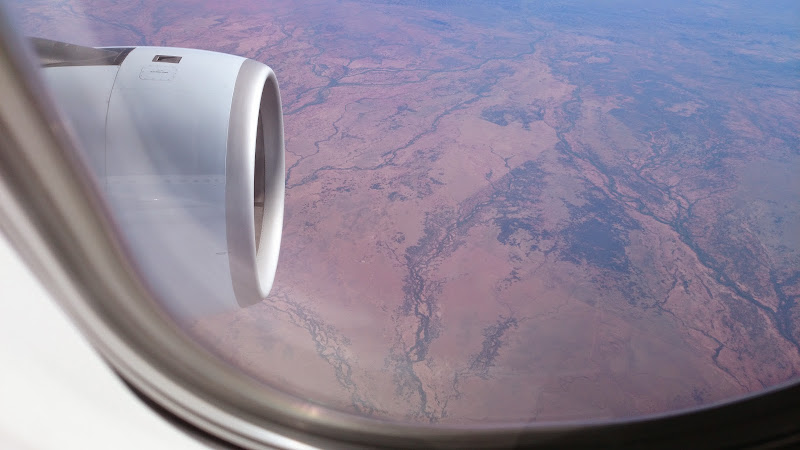 Another 20 minutes passed and the same FA once again tried to lean over me and close my windows. In the middle of the day. On a daytime flight.

I'm guessing this guy was new and had been told a strict set of procedures to follow. However common sense and manners seemed to have completely escaped the guy.

Once again the CSM saw what was happening and came over to apologise.

After another couple of hours one of my favourite sights in the world began to form. Sunset above the clouds. 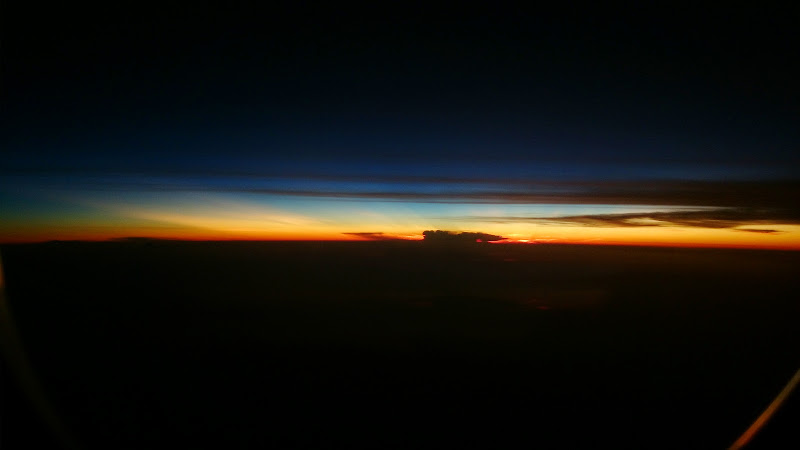 This is why I always go for a window seat. Moments like this, seeing the sheer majesty of the planet, really make you appreciate how amazing it is that we can so quickly travel around the world. Journeys that two generations ago were unthinkably arduous, can now be done in a day.

At this point I looked at the world map and realised that I had never heard of a single place currently in our immediate vicinity. I don't know much about Zamboanga but I do like their sunsets.

Around 90 minutes before our arrival, the second meal was served.
Unfortunately the male FA was in charge so meals were handed out according to seat location rather than status. Which meant that the mini-cabin was left with a choice of noodle soup... or noodle soup. Again not great, but edible (particularly when covered in the Guilin chili sauce). You'll notice I went with the red, I knew that the FA could find it

Soon enough the trays were cleared and my jacket was hung on the hook, ready for landing. 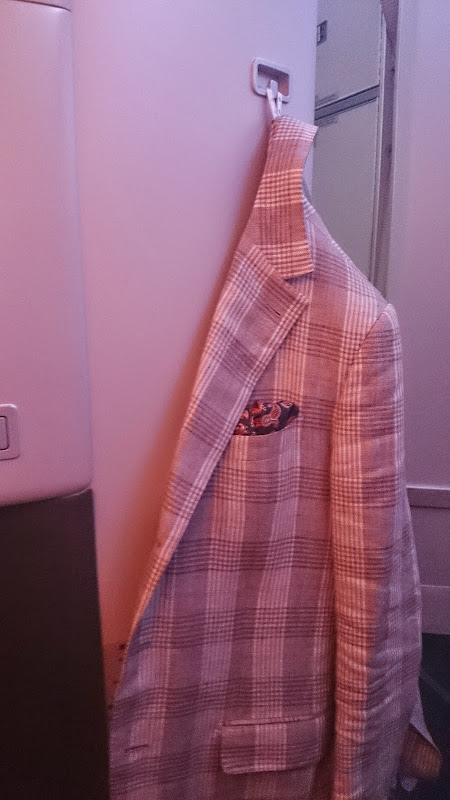